Frank Ferry’s strategy of day-dreaming (and texting) his way through City Council meetings has caught on[1]. Perhaps chastened by their negative reception of late, the councilmembers were, for the most part, mum. Maybe it was just the oppressive heat. Regardless, only Mayor Pro-Tem Marsha McLean—never afraid to snipe and snap—had much to say this evening. Despite many lingering questions about the library takeover, silence prevailed.

Councilmember Bob Kellar began the meeting with a call for Claritans to be politically engaged. He and a friend had spent the morning commiserating over state and national politics, he told the audience. They found much about which to be unhappy. But all is not lost. He explained: “November second. [long, dramatic pause] We owe it as Americans to exercise our right to vote.” Kellar then recommended the Official Voter Information Guide and the Internet as sources of information and dismissed television and the radio as media propagating “muck.”

Each councilmember spoke briefly during the period reserved for committee reports and general comments. Councilmember Laurie Ender applauded local convenience stores for reaffirming their commitment to keeping cigarettes out of the hands of minors. Frank Ferry, his shirt unbuttoned as if he was at a weekend barbecue, spoke out against the proposition to legalize marijuana. “It’s so different from the marijuana of the 60s” he remarked, wistfully. Kellar echoed the sentiment. He said that in his law enforcement experience, 95% of serious drug-users got started with weed. Dealing with alcohol-related problems, he assured the audience, was more than enough to keep our deputies occupied. 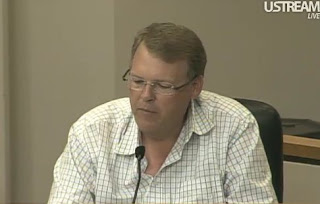 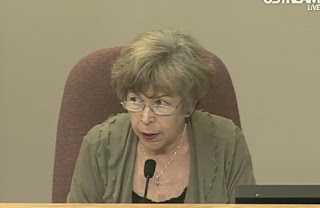 Emulating Frank, Marsha McLean sported a plunging neckline affording unwelcome views of her mottled bosom. She began her comments with the “really really really good news” that Elsmere Canyon will be preserved forever as open space. This is a far cry from the landfill it was once slated to become. McLean then asked City Manager Ken Pulskamp about complaints she’s heard regarding the Canyon Country Library. Construction, it seems, has come to a complete stop! (She gave a trademark eyebrow flash for dramatic effect). Pulskamp confirmed the rumor, stating that he didn’t know when (or even if—gasp!) construction would resume. McLean shook her head in rehearsed indignation and wondered aloud whether the County of Los Angeles had halted work on the library because they were “mad” that Santa Clarita decided to leave the county system. Though she was going on nothing more than a hunch, McLean said “It’s just not right, and it’s not fair.” (She would later reprimand library critics for spreading rumors, apparently unaware of her hypocrisy). The whole exchange between Pulskamp and McLean came off as a poorly-delivered bit of theatrics to make the County look petty and underscore the need for Claritan control over library operations.

.
Mayor Weste stepped in, bringing the show to the end. She opened discussion of items on the Consent Calendar. The Lutnesses were dismayed by an item to accept business-friendly principles proposed by the Southern California Association of Governments. The principles were: 1) Economic Development as a Priority, 2) Business Partnership, 3) Business Responsive Processes, and 4) Attractiveness to Business Investment. The principles were so general and vague as to mean nothing. However, the Lutnesses objected on the grounds that the City of Santa Clarita should prioritize service to its people over catering to business interests. But they really just wanted to complain about how the City Council handed control of public libraries over to for-profit LSSI. Carole Lutness made a gesture to show how the City was funneling money to the private corporation. It looked a lot like how one pantomimes s-e-x in grade school (a single finger thrust repeatedly into a fist; I blushed). She also brought up The New York Times’ story on the library takeover and said that the overwhelming majority of commenting readers disapproved of corporate control over public libraries[2]. Despite the rambling objections of the liberal couple, the City Council lent their support to the business-friendly principles.
..
The Lutnesses and Cam Noltemeyer also spoke about awarding a parking enforcement contract to Data Ticket, Inc. Carole feared the City was on a trajectory to privatize everything—transportation, libraries, parking enforcement… Noltemeyer drew attention to “some very interesting numbers.” With Data Ticket on the case, the City projects generating some $425,000 in parking enforcement revenue. She said “that sounds like a quota to me.” But Pulskamp said the program would be revenue neutral: $300,000 goes to the vendor, $125,000 to state coffers. He also said that enforcement would be (mostly) complaint-driven.
..
During Public Hearings, the City Council voted to prezone the Soledad Commons area as community commercial and submit an application to annex the area. Lynne Plambeck, representing SCOPE, was curious about why the council was making this (pre-)zoning change in the midst of the One Valley One Vision general plan review process, and she voiced concerns over the project’s proximity to the river. She’ll get a chance to bring up these concerns again at the ordinance’s second reading in October, and will again be ignored. (The City Council's silence extends to any questions they just don't feel like answering.)
.
The last public hearing was held to extend the urgency ordinance that prevents any new car dealerships from opening up shop in Santa Clarita. City staff reports a need to identify appropriate areas for these business in order to protect the public. Marsha McLean went through the motions of questioning the absolutely ridiculous ordinance. She pointed out that staff had vastly exaggerated the “proliferation” of new car dealerships (there was a grand total of two, she was told, which does not a proliferation make). McLean also questioned the wisdom of putting the “kibosh on legitimate businesses.” Joe Montes, sitting as City Attorney, defended the action with a ridiculous hypothetical. He said that without specifying areas appropriate for auto sales, someone might theoretically put a car dealership in an office park, and the test drives and oil changes and such would get in the way of the other businesses. (With arguments like that, one wonders at his professional success). His argument was good enough for Mayor Weste, who agreed with a chuckle that we certainly don’t want car sales taking place in the middle of office parks! Of course, the urgency ordiance is really just the City’s way to look out for the guys on Creekside while offering the kind of control that no doubt appeals to staff with anal-retentive tendencies.
.
Public Participation followed. Cam Noltemeyer kicked things off by handing out a public records request to find out where the City/Redevelopment Agency are getting $25M for the new library. She found it troubling that the City was already planning to reallocate library funds in anticipation of the LSSI takeover. Noltemeyer wanted the numbers in writing because “You can’t really rely on what is said up here.”
.
Then, the live feed from SCVTV went berserk and cut from the meeting to some woman dressed in a flag-like blouse and singing about the US of A. Thus, I missed Lynne Plambeck’s comment, but returned in time to catch Valerie Thomas speaking about the library. She had dug into the public record to determine the timeline of dealings between the City and LSSI. There was serious cause for suspicion. LSSI had already prepared a full bid (down to the number of trashcans they would purchase, she said) in advance of the City making a formal request; planning and research meetings that were supposed to have happened didn’t; other meetings or dealings with LSSI may have happened without public notice. All in all, things were fishy. As many have surmised, LSSI and the City may have been getting cozy long before Claritans had any indication of what was in store for their libraries.
.
Finally, Deanna Hanashiro, an ardent library supporter, questioned whether it would be legal for students to volunteer at LSSI-run libraries to the benefit of the private company[3]. She also questioned Frank’s anti-union sentiments in the NY Times piece that had been referenced earlier in the meeting—had he not been a member of the CTA when teaching?

When comments concluded, Marsha McLean asked Darren Hernandez about whether students could indeed volunteer at the libraries when LSSI is running the show. She said that some students had already emailed her and expressed the desire to volunteer once LSSI is in charge (f’reals, Marsha?). The typically clueless Darren Hernandez said this was the first he had heard of problems with volunteering and promised to investigate. McLean was a bit perturbed by the continuing negative reaction to the privatization of library operations, and instructed the audience to give their friends and neighbors only balanced opinions of what was in store for our libraries. The meeting ended at 7:47.
.
[1]Here’s the agenda
[2]The popular The NY Times article
[3]Coastal Sage, SCVTalk commenter extraordinaire, weighed in on this the other day: “NYT Comment 185 by Oofa in Seattle. I do learn something new every day: ‘It’s illegal in California to volunteer for a for-profit company without fair pay. A simple complaint to NLRB will shut that down (as well as require back pay for the volunteers) and if they had to pay their volunteers even minimum wage let’s see how profitable libraries become. Additional liability for volunteers injuries should drive their insurance up as well. Can’t believe the union lawyers haven’t pushed this one.’ I wonder if that law applies to Friends of the Library type groups. Create a non-profit owned by the City, and then have people volunteer for the non-profit, and just happen to work on City property. Silly Legislators and unions. There’s always a way to structure a deal to get around any problem.”