Tonight’s City Council meeting was a summer sleeper, but a few issues got people talking[1]:


*Should the City Council ask Buck to have a town-hall meeting, as one resident requested?


*City Council members receive emails, comments saying neither of the two sculpture options for the Newhall roundabout is acceptable.  People want a cowboy.


In short, Claritans think there are some conversations that need to be had, and soon.

The meeting began about 15 minutes late because of a long closed session.  City Attorney Joe Montes revealed that in the session, everyone except for Councilmember TimBen Boydston approved appealing a recent SCOPE vs. Santa Clarita decision.

For his invocation, Mayor Bob Kellar read the entirety of President Ronald Reagan’s letter about the approach of Alzheimer’s: “I now begin the journey that will lead me into the sunset of my life.”  It was an interesting choice.

Next came presentations to Claritans admirable for some reason or another.  A high school student who wrote a prize-winning essay on building houses for the poor in Mexico was applauded.  The Wykoff family was thanked for their work in supporting the Fourth of July Parade, and Melissa Null was recognized for her work as president of the SCV Council PTA.

Most of the regulars for Public Participation addressed that which they typically address: Alan Ferdman said some stuff about chloride, Valerie Thomas said some stuff about Placerita Canyon, and Cam Noltemeyer said some stuff about Whittaker-Bermite pollution and development.  More interesting were comments about red light cameras.  A Mr. Lissner (sp.?) claimed that the number of citations issued has almost doubled in recent months, and he said changing the cut-off by just a few tenths of a second could eliminate half the tickets.  It was not a red but a green light that upset Lynne Plambeck—the green-lighting of Disney’s film ranch expansion, that is.  She didn’t like that Disney’s Golden Oak Ranch development will flout so many of the tenets laid out in One Valley One Vision.  This doesn’t bode well for future County developments meeting the environmental objectives of OVOV, she worried.

Greg Aprahamian used his three minutes at the  microphone to call on the City Council to write a letter to Buck McKeon requesting that he hold a town-hall meeting.  Aprahamian has called or visited the congressman’s office many times, but he gets very little information or help.  He is particularly interested in trying to nail down McKeon’s position on immigration.  McKeon’s own local and D.C. immigration directors told Aprahamian they “didn’t know” McKeon’s position as recently as the week before last.  But with news that McKeon said everyone should be given some kind of legal status at an event last week (video at the VC Star[2]), he thinks a meeting is now especially important.

The comments of the night went to Duane Harte and Dante Acosta.  Neither like the art options for the soon-to-be-built Newhall roundabout—one is a stylized film reel showing a cowboy on horseback, and the other is an abstracted Tataviam shelter with LED lights.  Harte seems to be a man of simple and literal tastes when it comes to art: he wants a cowboy on horseback, end of story.  Acosta was a little more flexible, allowing for a Native American holding a spear on horseback (which begs the question, were the Tataviam particularly horse-inclined…or spear-inclined?).  It’s pretty atrocious that local artists and the Arts Commission didn’t realize they needed to consult these two before trying to capture the spirit of Santa Clarita in sculpture.

In response to comments, City Manager Ken Striplin said that red light cameras have been successful and he cheered the movie ranch approval for the jobs and money it will bring Claritans. Interestingly, he said that a recent quote (“somewhat misquoted,” he claimed) from Robert Newman did not indicate that the City of Santa Clarita is officially in favor of option 4 for chloride treatment.  This was in response to Cam Noltemeyer’s implication that expenditures and staff comments indicate the City knows what it wants to do with regard to chloride, even though they haven’t officially told residents.

Updates from the Council

Councilmember Boydston proposed yet another idea for what the Newhall sculpture really ought to be.  He suggested having a statue of William Hart looking toward his mansion with a statue or Fernando Lopez looking toward the Oak of the Gold Dream and a statue of a Tataviam Indian (possibly with a child) looking toward Castaic.  Even if it was just an idea, Boydston said more discussion and taking a commission-based approach (i.e., sculpt us this subject, artists) was the way to go.

Mayor Pro Tem Laurene Weste eulogized the recently dead of Santa Clarita.  She asked that records of her adjournments be posted online as a bit of history to be cherished.  Councilmember Frank Frank had nothing to say.  Councilmember Marsha McLean offered Boydston her condolences, as would many others (his mother recently passed away).  McLean is hoping to promote a resolution for the League of California Cities to make sure the State doesn’t make unfunded mandates, specifically when it comes to water issues.  And Mayor Kellar invited Claritans to visit the travelling Vietnam Memorial Wall, which will arrive in Santa Clarita next month.

All items on the Consent Calendar passed with the recommended actions and with very little discussion.  The biggest-impact item was transfer of $5M for affordable housing in Newhall.  McLean asked the City Manager if he could interact with Habitat for Heroes to see if they would be interested and able to play a role in shaping such a project.  Most of the other items related to landscaping, so there wasn’t much else to be said.

There were also three public hearings to annex parcels into maintenance districts.  Cam Noltemeyer complained this was a way to get homebuyers to pay for developer-associated or created costs.  Striplin said that was kind of the point (i.e., make those who benefit from services pay for them).  All were approved.  When Las Lomas was brought up for a maintenance district, McLean noted she found the wall built there unattractive and hoped it will be concealed by landscaping soon.

The meeting ended after Ray Henry used the second Public Participation to ask for more stringent rules in who can serve on the board for manufactured housing in Santa Clarita.

Only in SCV: Our Little Amazon's Rarest Gem

We have just entered the blooming period of one of the rarest species of plants on earth. It is called the Newhall Sunflower, though its scientific name is decidedly more captivating: Helianthus inexpectatus, “the unexpected sunflower.”[1] Fewer than ten individuals are known to exist the world over, and all are confined to a single, spring-fed seep near the Airport Mesa of Newhall Ranch.  The same seep produced another new species—the tiny Castaic Springsnail (Pyrgulopsis castaicensis)—just a few years ago.[2]  We might take for granted the existence of undescribed species haunting deep oceans or tangled rainforests, but who thinks of unknown life-forms lurking in Santa Clarita?  Is this seep our own tiny, verdant Amazon of sorts, brimming with the undiscovered? 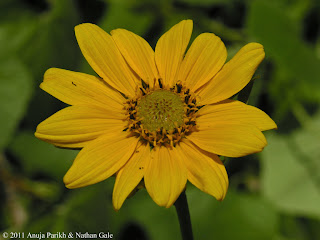 Anuja Parikh and Nathan Gale have shared their photos of the Newhall Sunflower in the CalPhotos Database.  The sunflower is known from only one location, a seep in Newhall Ranch. 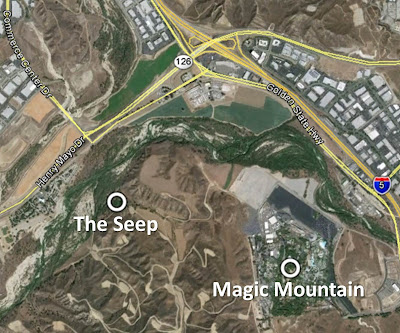 The Newhall Sunflower wasn’t the sort of plant that botanists immediately recognized as a new species, though they did immediately recognize it warranted special attention. In their 2010 paper describing H. inexpectatus, David Keil and Mark Elvin note that it was at first tentatively identified as the Los Angeles Sunflower, a subspecies long presumed extinct.  (You might remember an LA Times article from around 2002 proclaiming the rediscovery; it probably actually is extinct).  But multiple investigations of the sunflower’s genome—ranging from counting chromosomes to sequencing—revealed the sunflower was genetically distinct.  It appears to be most closely related to Nuttall's Sunflower, H. nuttallii, but it has unique morphological and genetic characteristics that warrant species status.

Keil and Elvin make some important points in their paper (emphases mine):
This all puts the plant is in a curious place.  It’s not listed by the State/Feds as an endangered species yet—they didn’t even know the species existed until a couple of years ago—so it doesn’t have the formal legal status of something like, say, our “officially” endangered spineflower.  The California Native Plant Society is more nimble than governmental agencies, however, and has classified the Newhall Sunflower as “seriously endangered” and “critically imperiled.”  A plant can’t get any rarer than that, and this categorization affords it some protection.


According to the literature, Newhall Sunflowers should be in bud this time of year and ready to bloom later this month.  Since the species' only known stronghold is on Newhall Ranch and off-limits to the public, there won’t be any rare plant safaris, so to speak, for those who would like to see it.  And that may well be for the best.  But if you’re the sort who likes to wander through the Santa Clara River, keep an eye out for a rather leggy sunflower growing in wet spots.  It’s most likely to be Nuttall’s Sunflower, and it's not always possible to distinguish one Helianthus from another.  (For some helpful hints, though, read Footnote 3.) I may be overly optimistic, but I like to think some more Newhall Sunflowers might be growing in another wet, willowy spot along the Santa Clara River.  And with the delay of the Newhall Ranch development, we might have more time to ensure it persists.
[1]The paper that informs this post can be viewed here: Keil, D.J., Elvin, M.A. 2010. Helianthus inexpectatus (Asteraceae), a tetraploid perennial new species from southern California. Aliso: A Journal of Systematic and Evolutionary Botany, 28:59.
[2]Do you like obscure, minute aquatic snails?  Then you'll  love reading this paper: Hershler, R., Liu, H.P. 2010. Two new, possibly threatened species of Pyrgulopsis (Gastropoda: Hydrobiidae) from southwestern California. Zootaxa, 2343:1-17.
[3]Experts on this sunflower warn that it may not be possible to identify it in the field.  Many of its characteristic measurements fall close to those of other species.  But in its treatment of the genus, The Jepson Manual/eFlora recommend looking at the phyllaries--the stiff, green, petal-like structures that lay beneath the flower disc--to tell one from another.  If the phyllaries are 3-5mm wide and bend downward at the tip, it' H. californicus.  If the phyllaries are 1-1.5mm wide and point upward, it's H. nuttallii.  But if the phyllaries fall somewhere in the middle at 2-3mm wide, it just might be H. inexpectatus.  So when you wander along the Santa Clara River, carry a millimeter ruler and remember this rule: broad, saggy phyllaries are californicus; narrow, erect phyllaries are nuttallii; and H. inexpectatus is intermediate in phyllary width and "posture".  Below, it's californicus left, nuttallii center, and inexpectatus right.