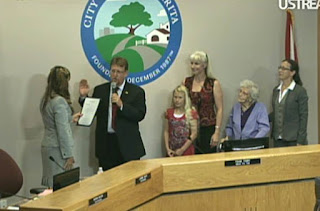 In a performance that likely delighted his supporters and aggravated his detractors, Councilmember TimBen Boydston was very much himself this evening[1].  He was the sole dissenting vote to appoint Frank Ferry as mayor; explored the loftiest of rhetoric in his acceptance speech; challenged a staff member’s salary directly with said staff member; and offered to visit a council-weary family’s home personally.  The spotlight, in short, was his this evening.

But first Boydston had to make an entrance.  The process began at 5pm, with Frank Ferry not so subtly sitting in the mayor’s chair and Laurie Ender absent for roll call.  Ferry congratulated Bob Kellar and TimBen Boydston on their recent election victories, and there was nearly a minute of congratulatory applause for them, concluding with a standing ovation.  The men were sworn in with their families by their sides.  Kellar even received a booming hip-hip-hooray! after his oath.

Next came acceptance speeches.  Boydston began with rather formal, artfully-inflected words of gratitude.  (They seem to have prompted someone off camera to mutter an annoyed “Oh my God…”, as picked up be some stray microphone).  He accepted the “sacred trust of representing you,” and quoted Abraham Lincoln and adopted rhetoric typically associated with higher political offices.  He pledged to listen, respect, and help the people of Santa Clarita.  He said he would serve everyone from the apartments of Jake’s Way to the ranches of our canyons, an allusion to former Mayor Ender’s marginalization of the Jake’s Way community.

The speech offered by Bob Kellar was far less affected with fewer formalities and fewer words.  He thanked everyone and said “I love this city and I love everybody in it.”

Kellar nominated Mayor Pro Tem Ferry to be mayor, and he was seconded by Laurene Weste.  Ferry asked for comments, and Boydston asked Ferry to make a commitment to respect everyone and not call people names.  Ferry ignored the request by asking, “Any other comments?”  There were none, and for the vote, everyone gave Ferry their support except Boydston.  It was a 5-0 vote, however, to appoint Bob Kellar as mayor pro tem.

Once these votes had taken place, Councilmember Boydston suggested that the mayoral term be extended for Ferry until April, at which point terms would change coincidentally with elections.  “I think it’s working just fine,” said Councilmember Marsha McLean, saying the “founding fathers set it up that way for a reason.”  She was not opposed to discussion, however. McLean would join her fellow members of council in acknowledging Laurie Ender’s service, and she indirectly challenged Boydston’s acceptance speech by emphatically pronouncing her promise to “continue” (vs. “start”) serving the people of Santa Clarita.  Mayor Frank Ferry had some comments as well, including a response to Boydston’s earlier request for a promise of respectful language.  Ferry claimed that people in the community and "five or six blogs" hit him with attacks like a “machine gun”, and that it can be, at times, hard to take.  He compared himself to Boydston, saying both were extremely passionate people, and offered that much of the time, people were seeing “not disrespect but disagreement” in his comments.

Public comments followed and they were short and generally constructive.  Valerie Thomas received applause for a suggestion to change the timing of elections to increase turnout.

There was a brief intermission before the usual meeting began at 6pm.

Councilmember Laurene Weste, whose tone was noticeably amiable and upbeat this evening, highlighted Santa Clarita’s great natural heritage and assets during her invocation.  Mayor Ferry efficiently zipped through the other formalities and before you knew it, it was time for general council comments all over again, this time on non-election topics.

McLean complained about the hoops that homeowners must jump through to get their SoCal Edison smart meters removed; Laurene Weste fondly remembered Judy Riley; TimBen Boydston cheered local churches for helping to feed the hungry as part of a national effort; and Bob Kellar  encouraged residents to support CEMEX solutions as well as Measure CK for Sulphur Springs.

The Consent Calendar was passed with only one minor hiccup on Item 7.  That item proposed using $325,000 to purchase just over an acre of land in Sand Canyon for road improvements.  Lynne Plambeck wondered why the City was purchasing the land when she said the developer of Vista Canyon, whose development the purchase stands to benefit, hadn’t yet put money into the Eastside Bridge and Throroughfare District.  “Things are being done for the developer that the developer ought to be funding,” she argued.  City Manager Ken Pulskamp said the developer will still have to pay into the B&T District and that the timing and price were too good to pass up.  This and other items on the Consent Calendar were unanimously approved.

There was new business concerning the administrative budget for the redevelopment successor agency.  This is the body that must see to fulfilling the various obligations left in the wake of the dissolution of Santa Clarita Redevelopment Agency.  Armine Chaparyan presented information on the budget, payment schedules, and other successor agency particulars.  After her presentation, Councilmember Boydston noted that the budget included more than $300,000 in salary and benefits for two full-time employees and some part-time work.  He wondered if that wasn’t excessive, prompting Chaparyan to politely reassert the validity of her position and compensation.  During comments, Alan Ferdman would likewise wonder about using more than half-a-million dollars to administer the debt between personnel and other costs.  Ultimately, however, the City Council was approving of the budget--for the most part.

Some other redevelopment topics arose during discussion.  City Attorney Joe Montes said that it’s not yet clear what will happen to buildings purchased by the City during redevelopment.  City Manager Pulskamp said he would be giving the council an item at some point in the future that would entail demolishing the City-owned buildings so as to prevent any undesirable (i.e., County) use of the properties were they to fall out of their direct ownership and control.

During Public Participation—which will likely be moving to a new format in future meetings based on all indications tonight—the Losorelli family complained about tennis lessons taking place in their neighbor’s yard.  Surely, dear reader, you recall this situation (massive tennis courts used for lessons installed in a quiet neighborhood, destroying quality of life).  Mr. and Mrs. Losorelli complained about issues with lights, grunting tennis players on weekend mornings, water damage, and more.  They said they would be forced to pursue additional (legal) action if the City didn’t act to help them.  Other comments during public participation included concerns about Colony Collapse Disorder of honeybees; the format of public participation, congratulations on the election, and Dr. Gene Dorio’s worries about the outlook for the SCV Senior Center.

Refreshingly, Ken Pulskamp responded to all comments (even the one about the bees, saying he didn’t know if a particular pesticide blamed for the disorder was used by the City).  Councilmember TimBen Boydston said he would like to come see the Losorelli house to better understand their problems.  Councilmember Weste shied away from this idea, citing the threat of impending legal action, but Boydston insisted he would visit only to learn more and would not make any assurances.