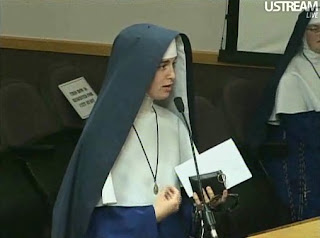 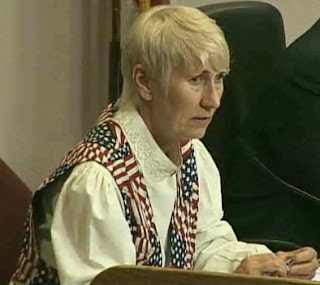 Tonight’s meeting was a fine send-off for the City Council, which will be “on hiatus”, as Councilmember Weste put it, until August 23rd[1]. (I hope you didn’t have anything urgent to tell them.) It was remarkable in several regards. This is the first evening in memory that included a superfluity of nuns (yes, that’s the collective noun); neither Lynne Plambeck nor Cam Noltemeyer spoke; and City Manager Ken Pulskamp waxed philosophical: “Iconic art is in the eye of the beholder.” Ultimately, rather little got done over the five-hour course of the meeting. Most items will simply come back before the City Council in a couple of months.

I tuned in beginning with councilmember updates. The male members chose not to speak. Mayor Pro-tem Ender and Councilmember Weste gave brief, forgettable updates. And Mayor McLean was typically verbose. She praised the dedication of 526-acres of open space in Haskell Canyon, suggested implementing a Mayors Information Breakfast for the press (I won’t attempt to force an apostrophe in there given the Mayor’s/Mayors’/Mayors Prayer Breakfast debacle), and reveled in the successful library openings. McLean also asked that staff keep a close eye on high-speed rail developments. It’s adorable that we focus so intently on issues where the City of Santa Clarita exercises essentially no influence of control.

The first contentious item on the Consent Calendar involved changes or updates to City Council norms. It’s a pretty entertaining list, with highlights including: “Council should not make snappy, sarcastic comments to the public or to each other”, “Council shall treat members of the public equally, i.e. refer to citizens by surnames”, and the proposed addition of “any member or other person using profane, vulgar, loud or boisterous language at any meeting or otherwise interrupting the proceedings, who refuses to be seated or keep quiet when ordered to do so by the Mayor or other presiding officer of the Council, is guilty of a misdemeanor.” It was this last bit that had people talking. Deanna Hanashiro wondered about the fine line between being outspoken and criminally disruptive. TimBen Boydston thought that “loud or boisterous language” was not cause for a misdemeanor, citing his and Frank Ferry’s tendency to raise their voices. Berta Gonzalez Barbier was more receptive, hoping the explicit statement about proper decorum might keep certain parties from chatting distractingly throughout the meeting. Ultimately, language about the mayor’s power to order people to be removed was not added to the norms and procedures. The power still exists, but Councilmember Bob Kellar succeeded in convincing fellow councilmembers that an overt statement was too “in the face of our community,” reminding them that “These are our friends out here, this is not the enemy.” Debatable.

Discussion of how to handle abstentions from voting were tedious. City Attorney Joe Montes spent several minutes (and a multitude of hand gestures) explaining, re-explaining, and re-re-re-re-explaining that if five members were present and two voted yes, two voted no, and one abstained, then a motion would pass. That is, abstention was viewed as acquiescence to the motion. This does not follow Robert’s Rules of Order, which would direct such a situation to be interpreted as a tie. Once this was understood, there was debate over which was better ensued. 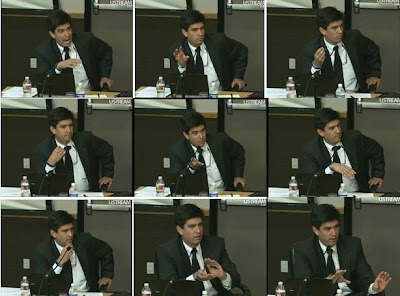 Despite his many excellent and expressive hand gestures, City Attorney Joe Montes had difficulty getting Council to grasp a rule that would would discourage abstention from voting.

Somewhat ludicrously, Mayor McLean spoke about needing to protect council members who “want more information” by allowing them to defer an item by abstaining. Obviously, she forgot these concerns when the library issue came up and Councilmember Kellar pleaded for one more meeting to gather information. Ferry countered that abstention could be used as a weapon, which didn’t really make a lot of logical sense. He prevailed, however, and a 2-2-1 (yes-no-abstained) vote will officially pass. Unfortunately, no one abstained when voting on the item.

Following a recess at 7:39, the City’s Historic Preservation Ordinance was discussed for the umpteenth time. During the staff presentation, ideas from recent meetings were presented. There had been the discussion over whether to allow owners to “opt out” of having their structure listed as historic, a designation which would severely limit their rights to altering the structure and so on. The option of opting out was popular with most of the public. As an alternative, an independent committee might instead consider listings—if opting out was not an option—to give owners additional opportunity to make their case for not being listed, for instance. Everyone agreed that there should be more incentives put in place for buildings designated as historic, and most thought that informative plaques would be a fair addition to structures that were historic but that were not officially designated as such. The Mayor and City Attorney, in anticipation of numerous comments from the Queen of Angels Church in Newhall, said that churches were exempt from historic designation if there was a protest and such listing would result in financial hardship.

Nearly two dozen parishioners and members of religious orders still took to the podium, arguing that Queen of Angels should not be forced to accept the burdens associated with being designated as a historic landmark. They wouldn’t be so designated, by all assurances, and Kellar asked that a letter be drafted to put this in writing. I didn’t find their repetitive remarks too annoying, perhaps because I’m Catholic (though not the QOA sort of Catholic), but also because they were rightly suspicious of why their church was still on the list of buildings to designate and because they thought other property owners shouldn’t have to endure burdens either. Plus, I have come to realize that there is an inescapable quirk of human nature that leads one to read all prepared comments whether or not they are strictly necessary. 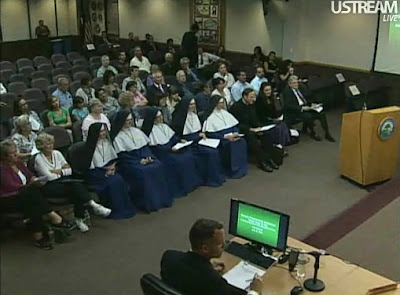 A classier crowd than usual.

Preferring the strongest possible historic protection were Duane Harte and Leon Worden. Worden spoke somewhat incoherently about property values in other communities that used historic designations and about the need to accept the will of the City, whether regarding oak trees or the preservation of 80-year old windows on historic structures.

Ultimately, staff will get back to work on the ordinance, drafting specifics for a committee and writing a letter about exemptions for religious groups and taking another look at the proposed list of historic structures. Ferry called Newhall Hardware more “endearing” than historic, for example, and wanted only indisputably historic structures included on the list. He also made some worthwhile points about a preference for public ownership of truly historic structures rather than counting on cooperation from private owners.

You may recall Councilmember Weste asking about a Veterans Historical Plaza Commemorative Brick Finder. Her idea fell on receptive ears, and staff presented three options that would allow people to find the brick dedicated to their loved ones: paper maps updated every six months, an electronic database/smartphone app, or an electronic kiosk. The option of an electronic database was the cheapest and seemed to be favored, but Kellar wanted formal feedback from the Veterans Memorial Committee. Options will be re-visited in the late summer or fall after additional rumination.

Finally, there was an item concerning a Request for Qualifications for what is intended to be an iconic art project for the roundabout in Old Town Newhall. Ferry wondered why the Arts Commission wasn’t playing a more prominent role, and Weste, too, wanted more expert opinion, noting many times that they want artwork that is truly unique and iconic, in a league not previously commissioned by the City. Pulskamp took an “iconic art is in the eye of the beholder” stance, and seemed confident in being able to get appropriate responses from artists. The City Council seemed receptive to increasing the budget from $45,000, but will wait for a recommendation from the Arts Commission, requesting that the artwork contain an appropriate, local historical emphasis. “We’re not looking for a statue of Paris Hilton,” joked Ender, usefully.

Public Participation was rather brief, including a "thank you!" the City for helping with parking for the Canyon Theater Guild. A man named Adam Parsley came forward to talk about medical marijuana use, saying his little brother had cancer and used it after chemotherapy. He said a drive to Hollywood was very taxing for his brother. Following this, they opened up a family “pharmacy”, which Parsley said is well-accepted by the community and donates to local hospitals. He said that he wants to open a co-op to serve legitimate medical users (and, ostensibly, some of the not-so legitimate users) of Santa Clarita. Ferry expressed his strong opposition to marijuana dispensaries, calling them a “sham” that “just isn’t going to happen.”

The meeting ended at 11pm.