A century ago, Christmas wasn’t all that different from today—carols, feasting, family. But there was one custom that’s all but disappeared. The side-hunt, as it was known, involved a walk through the countryside to shoot every bird in sight; he who shot the most, won. Things slowly began to change in 1900. At the urging of Frank Chapman, an ornithologist with the American Museum of Natural History, people went out and identified and counted birds instead of shooting them. That first year, there were 27 counters. For this, the 117th annual Christmas Bird Count (CBC), there will be around 70,000 counters, approximately 20 of whom will tally birds in Santa Clarita.

Though the Santa Clarita Christmas Bird Count is young compared to most CBC circles—this is only its 14th year—the numbers already tell the story of our changing valley. California Quail have declined markedly. From 2003-2005, the average count was 272 quail per year. From 2013-2015, it was a mere 46. Meanwhile, numbers of the copper-colored Allen’s Hummingbird are fast catching up to the more familiar, green and pink Anna’s Hummingbird. From 2003-2005, the average count was 5 Allen’s Hummingbirds per year. From 2013-2015, the average shot up to to 44. Why is Santa Clarita becoming bad for quail but good for hummingbirds? We can’t say for certain, but a likely contributor is development. Exotic, blossom-filled landscapes and medians planted in flowering Eucalyptus provide nectar to Allen’s Hummingbirds all winter long, but the wildflower seeds that quail relish aren’t as abundant as once they were. When Santa Clarita’s data is combined with data from more than 2,000 other count circles, some of which have been faithfully done for well over 100 years, you come to realize that the CBC is effectively taking the pulse of America’s bird populations. How are they doing? That's the big question. 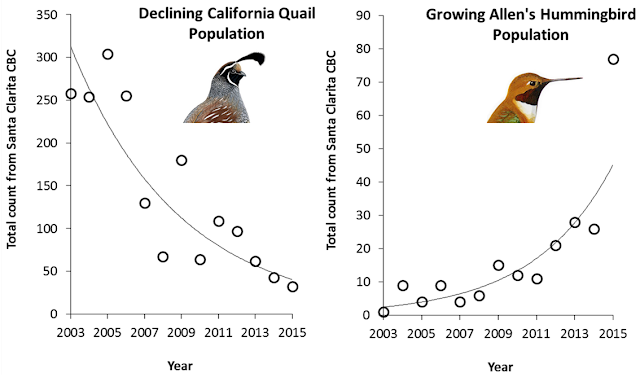 It’s a lot of fun, too. Bird people are wonderfully quirky. Most you’ll meet can instantly identify any of hundreds of species of birds almost immediately by sight or even by hearing a single chirp. It gets a little competitive trying to track down rare birds and count them all—everyone comes back to the count compilation lunch with their tallies and stories. I’ve done the count every year, and I’ve never regretted spending a morning chasing Claritan birds. Think about giving it a try this year. Even if you don’t know a Rock Wren from a Canyon Wren, you can get teamed up with some experienced birders and learn a lot. It’s the morning of New Year’s Eve (this Saturday). For more information, visit the unofficially official California CBC website and you’ll get count compiler Brian Bielfeldt’s email (http://www.natureali.org/cbcs.htm), plus learn about other CBCs. Hope to see you at the count!
Posted by A Santa Claritan at 1:35 PM 3 comments: