At tonight's meeting of the Santa Clarita City Council, Mayor Cameron Smyth distinguished himself from his fellow councilmembers in small but suggestive ways. Smyth suggested that it's time to "evolve" on the issue of marijuana, though like his fellow members, he was still in favor of an emergency ordinance limiting its presence in Santa Clarita. Making Old Town Newhall an arts district is the pet project of several councilmembers, but Smyth made it clear that he didn't want to micromanage things when he pointed out how odd it was for the City to lease and manage a theater for the arts--he still voted for the action, though. In the past, the council wouldn't even give former Councilmember TimBen Boydston the support to agendize/discuss homelessness. But tonight, Smyth suggested and earned support for an ad hoc homelessness committee from the very people who stymied Boydston. In short, Smyth is using the mantle of mayorhood much more proactively than his predecessors. He votes with the majority while nudging the trajectory of futures votes and policies. Let's recap.
No Fuss, No Frills Oath of Office 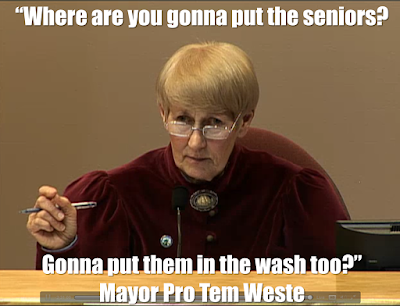 Before the meeting ended, TimBen Boydston came up to make a strongly worded comment about what Weste had said about theaters and the city's role in the arts. He said he was disturbed that she wanted to exert so much control, but Councilmember McLean suggested part of the disagreement might be confusion over what Weste wanted for the Rep versus the Auditorium. One can be confident that Boydston will let us know what he thinks as matters continue to develop. The meeting ended just after 8:30.
Posted by A Santa Claritan at 1:25 PM 8 comments:

It's a new year, a new mayor, and a new recap, at least inasmuch as anything "new" can ever really happen in Santa Clarita.  The main on-the-record highlight was Mayor Cameron Smyth and Councilmember Bob Kellar appointing various Claritans to various commissions. The main off-the-record highlight was unusually playful banter between a councilmember and public speaker. With just four members of the City Council, all of whom get along and aren't looking to stir the pot, the meeting lasted only one hour. Let's recap.

Mayor Smyth's invocation was a somber one. He asked for a moment of silence in observation of a local 14-year-old's recent suicide. Smyth said the tragedy hit particularly close to home because his own son is 13 years old, and he expressed his sincere sympathy for the affected family.

Awards and presentations followed the flag salute. Both of tonight's honors fell under the category of the arts--some students were recognized for drawing pictures about the dangers of distracted driving, and city staff were recognized for excellence in web design. Instead of the usual round-robin of reading copy about local, upcoming events, Mayor Smyth read through the whole list of announcements, which included the Cowboy Festival and a count of homeless people. Eulogizing duties were shared among the councilmembers, and individual reports from councilmembers were pushed back a bit later into the meeting than has been the norm.

All the regulars showed up tonight. Al Ferdman spoke about the water supply. There's a need for groundwater sustainability planning now (dictated by the State), but Ferdman wondered about whether existing urban use/planning documents could be updated instead of starting from scratch. He also sought clarification on the respective roles of the relevant parties, especially the City, County, and the CLWA. Cam Noltemeyer switched the topic to trash, asking Cameron Smyth to agendize discussion of Chiquita Canyon Landfill. She pointed out that the City of Santa Clarita frequently gets involved in issues outside of city boundaires, but it has long avoided wading into the Chiquita mess on the grounds that it's outside the city. Elaine Ballace spoke on a few topics, one of which was asking where the pay-for-grocery-bag fees went. She reported that at least one store clerk had told her the money went to the City, though she was informed that this was an erroneous statement by Councilmember Marsha McLean.

Steve Petzold brought up the big issue of who is going to take Assemblyman Dante Acosta's former seat. He said that many speakers at the previous meeting, most of the participants in an online poll by The Signal, and he himself felt that a special election would be superior to an appointment by the councilmembers. To help bolster his point, he mentioned the possible threat of another lawsuit by Kevin Shenkman because the City still hasn't gone to district-based voting and because an appointment might not be viewed as the most equitable means of filling a vacancy.

Stacy Fortner began her comments tonight with a special request of Mayor Cameron Smyth. I've transcribed it to the best of my abilities below:

FORTNER: "First of all, it's Julie Olson's birthday today, so, Happy Birthday, Julie! [turns to face companion in audience, applauds; continues, coyly] And Cam, I was hoping...maybe...you could sing 'Happy Birthday'...to Julie?"
SMYTH: "You know I'm more of a rapper..."
FORTNER: "Yeah, oh? Even better! I'll even cede my three minutes..." [gestures with arm as if transferring her speaking time to the mayor]
SMYTH: "As an artist, you know, you understand, as an artist, you can't just turn it on like that. I have to have some inspiration, so tonight, I'm a little bit, just not feeling right tonight."
FORNTER: [nodding understandingly] "Maybe a little later."
SMYTH: "Yeah I need a little more notice so I..."
FORNTER: "We'd like to see you get jiggy with it." [reference to 1998 composition by Will Smith]
SMYTH: [defensively] "I can..."
KELLAR: [interrupting] "There's a 'Sweet Lord!' if I ever heard one."

Clearly, such playfulness would not have been abided under the formerly Kellerian Council. Fortner then got to her more material remarks, explaining that she was also curious as to why the council wasn't more seriously considering the  option of a special election to fill Acosta's seat.

City Manager Ken Striplin responded to most of the speakers with his usual brisk efficiency.


A Bridge Broad Enough for Bikes

The consent calendar was very short. One item awarded a contract for the widening of the Newhall Ranch Road bridge, which currently narrows Newhall Ranch Road from eight lanes down to six,  impeding the flow of traffic.  For approximately $11.4M (plus contingencies and supporting funds), the bridge is going to be widened. Nina Moskol, chair of the Santa Clarita Valley Bicycle Coalition, came up to speak in support of the measure because it will include accommodations for bicyclists and pedestrians.

There were a few other items on the consent calendar, including adding one additional motor deputy and forming a new landscape maintenance district zone. All items were approved with the recommended actions.


James Farley came up to speak before Bob Kellar and Cameron Smyth made their picks for city commissions. Farley dedicated a lot of time to researching the open space district assessment when it passed many years ago, and he reminded the council that he has always worked to protect the interests of taxpayers and to make sure that land acquisition guidelines are followed. During his time on the Open Space Financial Accountability and Audit Panel, he reminded Kellar and Smyth, he found a recommended purchase that fell outside the allowable area for land acquisitions--that is, he corrected staff on having not followed the assessment spending regulations properly. He was also the only person to show up to lobby for a (re-)appointment tonight.

He didn't get it.  Instead, Councilmember Kellar and Cameron Smyth made the following appointments:

Interestingly, Smyth said of the open space accountability panel that, "Adding he [Henry Rodriguez] and Andre [Hollings] to that board is going to be a real dynamic board where you're going to see a lot of great activity." Since the board's essential activity is seeing whether all provisions are being appropriately followed, I'm not sure how dynamic it's going to become. In any case, everyone approved the nominations.

Before the meeting ended, Lynne Plambeck asked people to come to a hearing on Newhall Ranch development (she called it outdated "dinosaur planning") at Rio Pico Junior High School this Thursday evening. The Signal is having a forum for city council candidates the same night, which she found unfortunate over-scheduling of one evening as both events will impact the City's future.

The meeting then ended. Since little of substance happened, the real takeaway tonight was a character study of Cameron Smyth. He's been gone for quite a while, but he reminded people that he likes to make his presence known and that he is willing to directly engage the public far more fully than anyone since, say, Frank Ferry. One means of doing this is Twitter; he reads tweets during the meeting--well, at least during tonight's rather slow meeting. I know this because I and others live-tweet the meetings (use #SCCouncil to follow along), and Smyth liked and/or re-tweeted some of the tweets while it was still going on. This opens up a new avenue of very direct, very real-time access to the mayor that I could see being used to influence future, contentious votes. We'll see.
Posted by A Santa Claritan at 1:04 PM 4 comments: