Happenings: Beginning of the Ender; Ferry Puts Self First 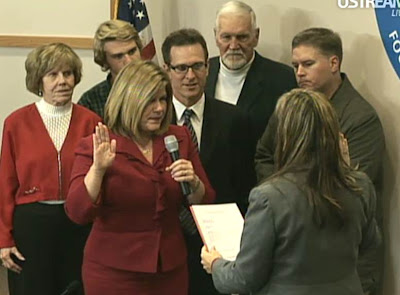 It was a big night.

While a tribute to Marsha McLean’s term as mayor was touching and Laurie Ender’s ascent was momentous, this was really the night that Frank Ferry snubbed Bob Kellar[1]. In a surprising twist, Ferry nominated himself to serve as Mayor Pro-Tem. While there’s no formal rotation, the informal one is almost always adhered to[2]. Bob Kellar was set to serve as Mayor Pro-Tem in 2011-12 and, it would follow, as mayor from 2012-13. Kellar would not acquiesce to Ferry’s self-nomination power-grab, but Ferry was easily carried by the affirmative votes of the female council members. He would hint obliquely at his motives by the end of the meeting, but we must wait for further explanation and to better understand the implications of this maneuver.

The evening started on an unusual note. The Senior Center Silvertone Singers were seated in the front rows. After several lengthy anecdotes from their director, they sang “Jingle Bell Rock” and “Home for the Holidays.” I couldn’t really hear the singing because the accompanying music was louder than their voices, but no matter—it felt festive.

Next, McLean recalled some of the important strides made during her term as mayor. “It has been an incredible year for me and our city,” she began. Notable achievements included: very successful community gardens; Creekside Road streetscape; Fallen Warriors Memorial Bridge; grand openings of the public libraries under local control and issuance of 35,000 library cards; crime reduction; acquisition of Haskell Canyon Open Space; Senses and other events promoting Newhall; the various festivals and events like the marathon, concerts, Cowboy Festival…; city-wide landscaping projects; and keeping the record of passing a “100% balanced and on-time budget.” She closed with flashes of her fighting spirit, promising to keep opposing CEMEX mining and to hasten the clean-up of the Whittaker-Bermite site. She thanked her fellow council members, staff, the community, and her family for their support.

Assistant City Manager Ken Striplin presented McLean with a plaque and a bag she can use to carry all of her papers as she busily commutes to the various boards and committees on which she serves. 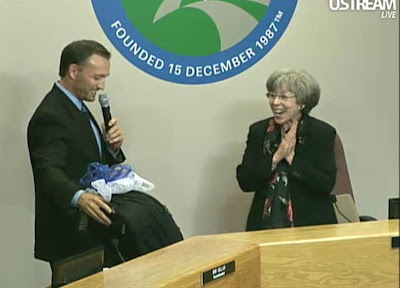 Oh, Ken, how ever did you know?
Then it was time for people to thank McLean. Local institutions and representatives from the offices of Buck McKeon, Cameron Smyth, Sharon Runner, and Tony Strickland were present to commend McLean for her excellent service as mayor. When posing for a picture with Marsha McLean, Scott Wilk and Scott Wilk Jr. stood next to Bob Hauter—they're not always the chummiest, especially since the race for State Assembly.

When it was time for nominations for mayor, Frank Ferry jumped in to nominate Laurie Ender, a motion that Marsha McLean seconded. Ferry said that Laurie Ender showed great leadership in pushing for the expansion of the Newhall Memorial Hospital campus and in spearheading the library takeover. Everyone gave their yes (or “aye”, in Weste’s case) to Ender.

Beaming with nervous energy, Ender called her family to stand next to her as she was sworn in. Ender made a crack about her son being so excited to have to stand with her, and Ferry jumped in to further embarrass the lad, saying, “He was flirting next to a cute girl and you interrupted him.” He has such a way with youth.

For a City Council that has, for so long, seen the same faces in different chairs, it was truly momentous for Laurie Ender to be taking on the role of mayor, even if the title is largely symbolic in importance. After the hugs and applause and handshakes, she joked that “The gavel may come in handy since I have three teenage boys!” Her first joke as mayor, awww!

When asked for nominations for Mayor Pro-Tem, Ferry very quickly nominated himself. There was a brief pause as people took in this unexpected power play. McLean was the first to respond, seconding the nomination. Mayor Ender asked for other nominations, but Bob Kellar did not nominate himself—nor did anyone else. He expressed his unhappiness at Ferry’s bold move by refusing to support Ferry’s nomination. “I would prefer to go with the usual progression,” he said, voting no. But everyone else said yes, so Frank Ferry is now Mayor Pro-Tem. This move distanced Kellar from the rest of the City Council to perhaps a greater degree than ever before. Ferry’s mention of HMNMH expansion and the library takeover, both of which were questioned by Kellar, seemed all the more meaningful in light of this maneuver.

The meeting resumed around 6:20. Mayor Laurie Ender presided over a couple of rather memorable acknowledgements. The first was so because it involved a vast sea of student volunteers in the “Safe Rides” program, the teens who drive their drunk peers safely home from parties[3]. McLean and Ferry were particularly adamant about thanking this group.

Bill Kennedy and his wife, Kathy, were recognized next. The pair has been a community fixture for just over a decade. Bill Kennedy’s work on the Planning Commission and his involvement in business and philanthropy were noted. Kennedy called his departure “bittersweet” because, while he’s losing the community he has been so involved in, he and his wife are moving to be closer to their grandsons. Kennedy had many kind words for Councilmember Kellar, by whom he was appointed to Planning Commission.

During reports and updates from the council, there was a little of everything. Kellar plugged Sake Bistro & Sushi. He has an old-timey sort of affinity for the entertainer, “Jimmy,” and made the joint sound like a swell place for you and your gal on a Sunday night. Ferry thanked Santa Clarita’s arborists for pruning trees so that recent windstorms didn’t topple them over, as happened in other Southland communities. McLean encouraged everyone to see the moving exhibit “Highwire Act: Insights into Substance Abuse”, at the town center through early January.

The Consent Calendar was approved without discussion or public comments. This meant that measures allotting funds for concrete repair and accepting a mini-grant to fund twelve sobriety checkpoints were approved.

Falling under New Business were the mid-fiscal-year budget review and adjustments. Ken Striplin said that despite the fact that that State of California is vying for local funds and has not reimbursed the City for certain expenses, the budget isn’t in fine shape. New spending would take place to fund a Canyon Country Community Center, improve the accessibility of open spaces, beautify Railroad Avenue, design more parking spaces for the Valencia Library, support community group use of the Performing Arts Center, and other sundry projects. $140K was allocated to improvements to the first floor of City Hall, including the council chambers.

In what probably should have been a separate item, staff also proposed establishing a trust to cover post-retirement health care benefits. Striplin said that the City is unique in being able to cover these liabilities without going into debt; the same cannot be said of other municipalities.

There were no speakers from the public. Councilmember Weste asked about staffing for the Canyon Country Center, and Striplin said it would be covered by full-time staff already under the employ of the City, with new part-time staff hired as needed and volunteers making up the difference. The recommended actions on budget adjustments and benefit funding were taken.

During Public Participation, the sole speaker was Berta Gonzalez Barbier. “I am a little confused as to how this works,” she said, referring to the fact that Bob Kellar hadn’t been voted Mayor Pro-Tem. “Just from a casual observer [her observations are hardly casual, most would agree], it sort of appears to me there’s been an effort to marginalize Bob.” Exactly. She said she wasn’t happy about the fact that he has lost his seat on some committees, and she was even less happy to have seen him skipped over at tonight’s meeting.

Ferry decided to respond. In a rambling, wide-ranging, unstructured, generally incoherent speech, he said that his life has changed a lot this year. He awoke from the coma, his sons are finishing school, and he may be getting ready to marry his partner. He said that after much “reflection and re-prioritizing”, he decided he really wanted to be mayor for his sixteenth year on the City Council. “I am looking forward to my life for what my future may hold,” he said. His speech was chock-full of “me”s and “my”s and mine”s. It was, truly, all about him (or his family, a more generous listener might contend).

One logical interpretation of his train of thought was that this was Ferry saying his life is moving onto a new phase. He either wants to go out as mayor, leaving on a high point (he did stress how very long he’d been at City Hall), or he’s seeking mayorhood as a means of reaching higher office and wants to have the big title while he pursues his ambitions. And of course, he has to get back at Kellar for his support of David Gauny, who almost took Ferry's seat, and who has fought Ferry and the rest of the council on a number of items. More clarity will emerge soon.

[1]This was definitely not on the agenda.
[2]Leon Worden goes over a couple of exceptions at SCVNews.
[3]I know, they’ll also drive people home who are just in unsafe situations and are not drunkards, too. And yes, I quite agree it's better they drink and call than drink and drive.
Posted by A Santa Claritan at 12:53 AM 1 comment: