Only in SCV: [BLANK] in the River

I know. The annual Santa Clara River Rally was three weeks ago. I haven’t yet had time to blog about it (or anything else, for that matter) for several reasons, none of which would be of any particular interest to you. Still, I think the river needs to be discussed. Thus, here are notes on the mighty Santa Clara presented somewhat late. As repayment for my tardiness, I offer you a theme: [BLANK] in the river.

But before getting to what [BLANK] is, let me set the scene: the River Rally comprised mostly high school students doing community service for class requirements or to put on college applications. There were also the obligatory scout troops and a fair sprinkling of local crazies. Once you arrived, you signed a waiver (something like “by signing this sheet, I agree not to sue the City and transfer ownership of my undying soul to Mr. Ken Pulskamp”). For your trouble, you got a bright green wrist band. Next, you were supposed to go to some inane “Biology Training” where they told you not to pick up snakes, eat the wildlife, or needlessly trample endangered species. I skipped that part. Finally, you were given gloves and a big trash bag and told to clean the river to your heart’s content. 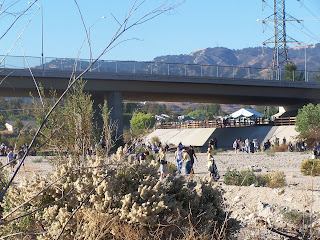 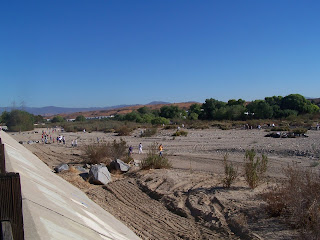 No, your eyes do not deceive you. There were a lot (>1000) of Claritans at the clean-up, many of them young and with far better ways to spend their Saturday morning. What drove them to clean? Most likely, they recognized that volunteering gives a boost to college apps and improves their odds of one day escaping Santa Clarita.
.
After picking up trash and dumping it at a designated spot, you were handsomely rewarded with swag. You got quite a lot of free stuff in the tent set up for local groups and businesses, among it compact fluorescent lights, a blue reusable grocery bag, vast quantities of pens and pencils, a thing that made noise and blew bubbles, earth-shaped stress balls, and bananas.

Now that you have the background on what you could have experienced if you actually showed up to the River Rally, it’s time for you and me to move onto the [BLANK] of [BLANK] in the River.

1. Shit in the River
And I do mean shit in its most literal form. There are people living in the Santa Clara River (see Item #2), and people, with rare exception, defecate. This led to an abundance of used toilet paper in parts of the river bed.

A friend and I got to the River Rally early, and we were part of the advance guard moving north through the wash. I started picking up pieces of white, linty paper when my friend yelled “That’s used toilet paper!” Unfortunately, I hadn’t noticed the used part before picking it up.

Now the good news was that I was wearing gloves. The bad news is they were basically loosely-woven garden gloves, not exactly ideal for handling…y’know.

Other cleaners also went on to encounter the discarded toilet paper. Two high school girls showed remarkable ingenuity when confronted with this challenge. Like in a documentary about primitive man, they improvised tools from sticks, spearing the toilet paper with a sharp branch before putting it in the trash bag. I was duly impressed.

I don’t think the shit in the river problem warrants latex gloves for all cleaners next year, but maybe a shit brigade could see that the little kids don’t accidentally stumble across a pile of used toilet paper.

2. People in the River
At the risk of redundancy, POTRs—People/Persons Of The River—are a regular feature of the Santa Clara riverbed. Theirs is a seasonal lifestyle with winter floods and river clean-ups forcing them to temporarily live elsewhere.

One POTR residence, beneath a cottonwood tree, stood directly in the path of the clean-up. It was clear this was no beer drinking venue for teens; it was a home. There were big, multi-gallon water containers sitting in the shade. There was a relatively clean mattress, a table with chair, tarps to block afternoon sun, and even a little stuffed teddy bear. The number of discarded food wrappers and personal items suggested they’d been there for a while. I lingered in front of the tree sheltering these living quarters, curious to how people would react. 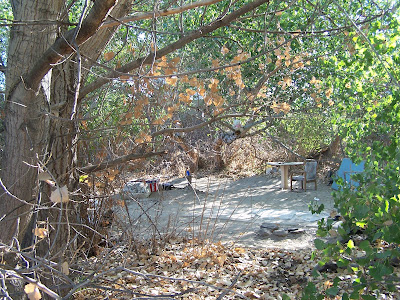 One mom with a group of kids simply steered her helpers away from the tree, saying other people would take care of it. A high school student wandered through the site and wordlessly examined all of the possessions. Most people respected the fact that this was somebody’s stuff--probably all they had--and didn’t treat it like trash.

When I returned to see what had happened a bit later, however, I found the whole area cleared. The simplest explanation is that a group of cleaners after us had decided to demolish the little home under a tree. The whole thing makes me uncomfortable. Sure, the POTRs didn’t own the land and they were leaving a lot of trash, but it felt like one was violating some deep, unspoken law of personal property after even walking into the encampment. I suppose the eviction was inevitable, though. If it hadn’t been the cleaners, it would be the rains. That's life for POTRs.

3. Arundo in the River

I want to close with what I think is excellent news.

There’s a plant called Arundo donax—“Giant Reed” (the reed used in wood wind instruments). I hear most people call it bamboo, which is close enough. In any case, Arundo (uh-RUN-doe) is native to the Mediterranean. Some years ago, it was introduced to California and invaded rivers and washes mercilessly. Bits of the plant break off in floods and reroot elsewhere, helping it spread. It is well established in many parts of the Santa Clara.

The downsides of Arundo are many:
1. It’s very flammable.
2. It breaks easily in winter floods and can clog the infrastructure that helps channel flood waters away from homes.
3. It is inedible to most local insects. By supporting fewer insects, there is less food for local lizards, birds, and other insectivores.
4. Non-native Arundo can smother native willows and herbaceous riparian plants, leading to less biodiversity in our rivers.

It’s also creepily hard to kill. I cut a few canes of it to use as supports for my green bean vines. I cut the Arundo canes off at the base, which would have killed most plants, and I set them in direct, 95-degree sunlight for two days. I then plopped the canes in the ground for the beans to twine up. Within a matter of weeks, the Arundo canes had rooted and were producing new leaves. I was justifiably freaked out by the plant that wouldn’t die.

Clearly, to remove Arundo, you need a devoted team of specialists. At September's City Council meeting, the Council approved a measure to do just that and have Arundo in the Santa Clara removed. It will be good for the environment and, better yet, grants are paying for it. So way to go, SCV, for letting people do good, positive work for free. But motives and investment aside, the Santa Clara River will be the better for Arundo removal, just as it stands better for removal of all that trash. 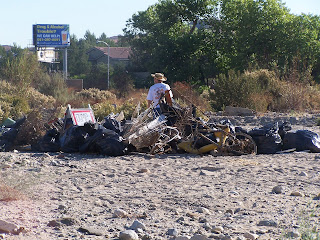 Here I'd make a joke about trash and Santa Clarita, but where's the sport in that?

Posted by A Santa Claritan at 9:21 PM

This was great. On one hand I want to make friends with POTRs, but then I think about all of that "linty paper" you found and realize that initiating friendship by shaking hands with POTR would be a problem for me.