Happenings: The Coup that Wasn't and Mini-Crises

A coup! A coup! Aye, a coup! Laurene Weste has discarded that pesky “Pro-tem” title and claimed the Mayor’s chair for herself! So I thought when tuning into this evening’s City Council meeting, where Weste sat in the seat of power and called the meeting to order[1]. With a velvety plum jacket in addition to the usual glasses and shock of blonde hair, Weste looked a bit like one of the friendly wizard professors from Harry Potter, about to preside over a lesson in magic…or usurpation(…or magical usurpation?). All too soon, though, it was revealed that Ferry remained Mayor, and Weste was just doing her Pro-tem-ly duties. 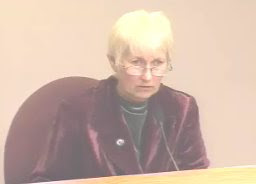 The obligatory Awards/Recognition portion of the program was up first. Recognized were the College of the Canyons Cougars for their performance in the American Collegiate Hockey Association National Championship Finals. The other recognition went to the City Aquatics staff for their support of FBI water recovery training and general excellence. In short, it was an awards ceremony for those good at skating on frozen water and for those good at providing recreation and training in liquid water.

Weste kept the meeting moving at a brisk pace as she invited her fellow councilmembers to make general comments. Laurie Ender reminded Claritans that the skate park will be opening on Friday the 27th. Bob Kellar encouraged everyone to attend the golf tournament benefiting The Boys & Girls Club (“The whole family wants to go!” he less-than-convincingly claimed). In what would be the first of several mini-crises, Marsha McLean asked City Staff how well prepared Santa Clarita is for AB 32 and SB 375, two measures that will reduce California’s greenhouse gas production by curbing transportation emissions, improving energy efficiency, and combating sprawl, among other actions[2]. Finally, Laurene Weste ended the comments by reminding us that Cowboy PoFest (minus the Po, obviously) is fast approaching, that Old Town Newhall will soon look prettier because of streetscaping, and that she is “anxiously optimistic” about CEMEX-resolving legislation. Weste also asked City Manager Ken Pulskamp about the feasibility of a community garden. In a previous meeting, she asked him to direct City Staff to investigate the potential for starting such a garden in Santa Clarita, which I happen to think is an excellent idea. He replied that staff members have made progress by visiting other community gardens and “taking pictures.” Really, Pulskamp? Really?

With that, we moved onto the Consent Calendar, which was approved with but one remark. That remark came from a bicycle safety instructor. He was concerned about issues of right-of-ways and liability/responsibility in a proposed ordinance that would allow some use of sidewalks by bicyclists. McLean was also troubled by one of the rules that would have bicyclists dismount to walk their bikes across crosswalks (mini-crisis #2). Everyone’s fears seemed to be quelled by City Attorney Carl Newton’s assurances that the ordinance was drafted to ensure the utmost safety for pedestrians, bicyclists, and drivers and with full knowledge of liability issues. The ordinance was passed to a second reading. Other elements of the Consent Calendar were even more mundane (e.g., traffic signal light replacement).

Next, there was a public hearing that had to do with storm water pollution prevention fees, which are collected from essentially all property owners served by storm drains. The title of this item implied that there would be a reduction in the fee from $24 to $21.50 per resident, so I wasn’t quite clear on why the whole thing wasn’t just approved sans presentation. Councilmember McLean clarified why in mini-crisis #3 (the most helpful of all the mini-crises). It’s more of a fee restructuring based on property permeability, etc. than an across-the-board fee reduction. 86% of parcels would see lower fees, but 14% would see increases, and fees could be changed in the future. It’s a matter I can’t quite summon up to passion to investigate more fully, but if you find the urge to, please review Agenda Item #9[1]. In any case, the Council’s actions tonight got the ball rolling on this fee restructuring, and McLean made certain that there would be appropriate transparency in communications between the City and property owners.

During Public Participation, we had another case of homeowners suffering because of City-approved big commercial projects sited near homes. A Claritan gentleman spoke about noise and light pollution coming from the Golden Valley Shopping Center. The City will investigate further, it seems.

[1]Here’s the agenda, a tried-and-true cure for insomnia.
[2]A brief presentation by Alexander Clayton (Cal Poly, Pomona) on these bits o’ legislative fun.
Posted by A Santa Claritan at 10:59 PM

It seems most home owners or potential home owners need to get a grip and do their homework.

If a project is already built when you look at a home to buy, you need to do drive bys at all hours to get an idea of how it impacts the property you are interested in. If it is negative, you go find another house to buy. There is not exactly a shortage of houses for sale.

If you are looking at a house with vacant lots near it, you need to check with county planning to see if anything has been proposed for the site. Again, if you don't like what is planned, go buy somewhere else.

Our society has made far too big a deal of the idea that every person can complain about anything they want. Grow up and do your research.