Tonight’s meeting was business-as-usual with a smattering of CC firsts: Ken Pulskamp validated public comments, the Council made a 30-second commercial during the meeting (and on the first take! way to go!), and Public Participation was over in a blissful ninety seconds.

Before these unprecedented happenings could happen, however, things got rolling with recognitions and proclamations. COC Chancellor Diane Van Hook[2] received recognition as Woman of the Year from the LA County Commission for Women and County Board of Supervisors. Far more interesting was Mayor Ferry’s proclamation of Santa Clarita as host for the 2009 Western States Police & Fire Games. Literally thousands of police and fire professionals will spend a week competing in baseball, paint ball, motor cross, archery, equestrian, karate, and dozens of other competitive sports and events. Mayor Ferry said he will even take part in a dodge ball game, at which he good-naturedly joked: “C’mon! I’m the biggest freakin’ target in the United States!” To get in a “freakin’” of my own, these games sound pretty freakin’ awesome--part summer camp, part Olympics, part good excuse for dodge ball. Ferry proclaimed the games open the middle of June. 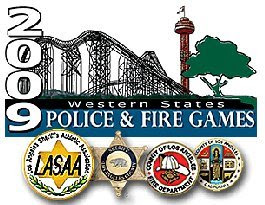 The logo pays homage to the iconic Magic Mountain and the even more iconic tree-from-City-Logo [3].

Next, members of Council got a chance for show and tell (minus the “show”). Laurene Weste filled us in on the Sanitation Board meeting that preceded this evening’s City Council meeting. She said Santa Clarita has done its very best to maintain water quality and that much more information is needed before fees triple to treat high chloride levels in our water. A fee increase has been delayed, at least for now, in the name of more-information-is-needed. When it was her turn to talk, Councilmember McLean discussed the "Save Your City" initiative[4]. This includes a website that allows cities to stick up for themselves against a state government trying to give them the shakedown for local money to balance the State budget. Other cities have posted what amount to commercials of opposition on the website. Ferry delivered Santa Clarita’s own version that was taped and that should soon be available for viewing online.
Ours isn’t quite as good as Compton’s, but it’s in the same spirit: “Take your hands off of the City’s money, not just Compton’s, but every city”. In our favor, the Santa Clarita video is more concise (this video should have stopped at the 2-minute mark). [5]
Next, the joint City Council/Redevelopment Agency (which looks alarmingly like the regular old City Council) convened. A first reading of the City’s plan to extend eminent domain powers drew a few angry comments. Alan Ferdman hit all the main points. He said that even if the City wouldn't overtly use eminent domain to obtain a property, the threat would be just as effective. He drew an analogy of someone holding a gun to another person’s head while demanding a donation--one that would be in everyone’s best interest, of course--and promising not to pull the trigger. It was a clunky analogy, but apt. City Manager Ken Pulskamp took the “Really, what this does...” approach to responding (i.e., you all disagree, therefore you do not understand; let me explain so you will agree with me; I’ll talk slowly). Ferry, who has been annoyingly even-keeled and reasonable lately, noted that while two residences would be up for grabs via E.D., all other homes would be protected. Furthermore, the two seizable properties would get their own hearing and be taken only at the discretion of the Council. That's all fair enough, but I'm still annoyed that Pulskamp pretends like the City is *always* able to negotiate a deal to everyone's liking in these eminent domain proceedings.

As for highlights on the Consent Calendar, several prominent Claritans were upset by plans to purchase 140 acres near Placerita Canyon. This would become part of the City's permanent open space. The property , though, is contaminated, which caused many to wonder whether the City wasn’t over-paying to take a toxic burden off somebody else’s hands.

Rick Gould responded, stating that only about 5% of the acreage is not-buildable and that only a couple of acres are actually contaminated. Thus, purchasing the parcel would preserve some areas that could theoretically be developed while also providing some important open space linkages in the southeast of SCV. City Manager Ken Pulskamp said that the recommended course of action for treating the contaminants was actually to take no action at all, and that there was no real danger to the public. The purchase, made in part with Open Space Assessment money, will be made.

Next came discussion of an item to restripe parts of Lyons Avenue and Bouquet Canyon Road to make three lanes. J-to-the-Wilson gave an earnest entreaty to think about bicyclists, those curious people who move on two wheels instead of four and who might fare better with the status quo. Andrew Yi, City Traffic Engineer and general transportation whipping boy, came forward to give what amounted to a “Sorry, but there are more drivers than bicyclists.”

Moving down the agenda, we came to an item that explained how Blue Barrel Disposal was faced with $470,500 in fines from the City for breaking part of its franchise agreement (i.e., not having a fleet younger than a decade). Instead of paying up, the company and City tentatively agreed to implement some waste diversion programs. These include manure collection (any customer may request a manure bin and have it collected weekly) and one mailable sharps collection container per household of those who generate sharps, such as diabetics or druggies. Laurie Ender wondered aloud whether these and the three other programs were worth $470K. Apparently, they kind of are, but the compromise was also a matter of take-what-you-can-get.
Having spoken out against the open space purchase earlier in the evening, Jim Farley rose again to speak out against the City’s levying of the Open Space Assessment for the third year. Farley called it an “illegal tax,” citing consultation with a top—but unnamed—attorney in this area of law. The California Supreme Court decided a very similar tax to buy open space in Santa Clara was unlawful, and both Farley and Cam Noltemeyer said the two assessments were all but identical (meaning, by extension, that SCV’s assessment was similarly illegal). The City took the “we’re not going to respond” approach and passed on engaging the issue.

All in all, the Consent Calendar was approved, the only change being an allowance for a 90 day (vs. 60 day) reading/circulation period for the One Valley, One Vision Environmental Impact Report. I am still creeped out when I type that name.
Unfortunately, there was more meeting to be watched. Fortunately, it included angry people.

A “Stormwater Pollution Prevention Fee Rate and Methodology Adjustment” was discussed at some length. The adjustment (up to this point it had been called a reduction) would mean that about 86% of parcels would see their rates go down, saving $3.50. However, the other 14% of property-owners would get screwed, seeing their rates increase by over $100 in some cases. The fee adjustment was meant to more fairly assign costs to those whose properties shed water rather than let it percolate into the ground. Calculations of charges were based on outrageous figures of how much impervious surface (concrete, buildings, etc…) the average large parcel has. Many speakers came forward to say that they, as people with large but mostly natural properties, would be paying far more than their fair share even when their land plays a vital role in allowing rainwater to seep into groundwater basins.

“The methodology is obviously flawed” said Laurene Weste. Councilmember McLean said “In selling this … it pretty much always says a fee decrease." She called this framing disingenuous because when the CPI increases, the council can also vote to increase the fee. McLean had a “real problem” with several other aspects as well. Yeah, this wasn’t such a good one for the City. City Manager Ken Pulskamp then did what is quite rare and called the public's comments "persuasive", agreeing to take a closer look at the methods and numbers. The adjustment will undergo a fair bit of its own adjusting, it seems.

The last big matter was contracting an EIR for the North Newhall Specific Plan. Homeowners from Placerita were especially concerned about a connection from Lyons Avenue to Dockweiler Drive and what it would mean for development of the Casden property. Alas, they’ll just have to wait on the EIR.

‘Twas 8:54 and after a last-minute Public Participation comment on the Lyons to Dockweiler connection, we adjourned.

[1]The Agenda, for all you insomniacs in search of a cure
[2]I've never met her, but she is a woman that a good friend of mine dislikes let me say…immoderately.
[3]To learn more, go to the source
[4]Save SCV from the money-grabbers in Sacramento, y'all!
Posted by A Santa Claritan at 11:22 PM

Trash companies - They have always found a way out of paying fines and fees. Pulskamp is as much in bed with them as George was.

Did you know you can create short links with LinkShrink and get money for every click on your short links.