For those who like their councilmembers loud, dismissive, and burnt-out, today was a good day. Incumbent Frank Ferry won reelection to the City Council, defeating challenger David Gauny by a mere 32 votes. He will be joining fellow incumbents Marsha McLean and Laurene Weste for another four years behind the dais. Ferry is perhaps best known for his decision-making style. After hearing about a difficult issue, he immediately makes up his mind and then zones out until it’s time to vote.

We are well used to Frank Ferry by now. The Santa Clarita City Council has included him more often than not. Indeed, both he and Laurene Weste have been in charge for more than half of Santa Clarita’s years as a city. Like herpes, once the City Council got Ferry, he was there to stay. (He’s usually quiet, but the flare-ups can be something.)

Click to make this chart larger. It was constructed using the timeline in the excellent The City of Santa Clarita: Celebrating 20 Years of Success by Gail Ortiz and Diana Sevanian.
Before his tenure could be officially extended, however, 600 or so votes had to be counted. These were votes that remained after the main count last week and that would decide whether Frank Ferry or challenger David Gauny won a seat.

Watching this morning’s count proved exhausting. SCVTV played what are apparently its only five music clips, each of which was about a minute long and combined the worst elements of 80s synth, Mannheim Steamroller Christmas music, the Disney Electric Parade theme, and background music from the Oregon Trail computer game circa 1996. I recorded clips but for some reason can't embed them--sorry. 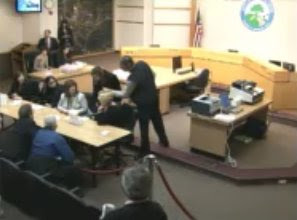 After the counting, City Manager Ken Pulskamp announced the winner. Gauny had waited for the results in the front row with his lovely family by his side. But victory was not to be his.


Why did Ferry get those extra three-dozen votes? It’s tough to say, but I have found one variable that was very tightly correlated with the number of votes that the top five candidates received: the total square-inches of glossy campaign mailers on which they appeared. I gathered the dozen or so campaign mailers that were sent out this year, measured them, put the numbers into a spreadsheet, and fitted a logarithmic model. It has an R^2-value of 0.995, which means that the very simple model describes the actual election data extremely well. The logarithmic nature of the relationship suggests that even a single campaign mailer made a big difference in the number of votes a candidate received, but there were diminishing returns as a candidate put out more and more mailers. But the relationship between mailers and vote shares is only correlational—it doesn’t imply causation. 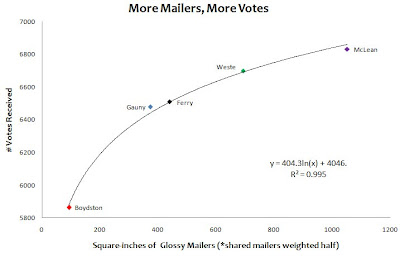 That’s just one of many problems, I know. I fit a curve using only five data points; I made it after the fact so it can’t be tested; important variables are missing; I excluded half of the candidate pool… Still, it’s a really good fit. This is probably because the number of mailers issued is an accurate indicator of many factors important to winning the race. As Tim Myers has pointed out, these important factors tend to be correlated. There are those candidates with lots of money, lots of endorsements, and lots of mailers (we call them incumbents); and then there are those with very little of anything. So, at least for this election, it looks like square-inches of campaign mailers ended up being a very good indicator of how the candidates would perform.

In real world match-ups of David versus Goliath, things don’t always end Biblically. But Gauny has already demonstrated that he can work effectively using his three-minute comments at City Council and reaching out to his neighbors, and the City Council would do well to heed his words considering that more than 6,000 Claritans voted to put Gauny behind the dais. If he runs in two years, he might well take over the seat that Bob Kellar has occupied for a decade, something that both parties would probably be pleased about.
Posted by A Santa Claritan at 11:05 PM

Everyone I know is very unhappy about the outcome of the election. It seems most voters in Santa Clarita don't take the time to do their research and see the facts as they are. Not only voters, but reporters and editors at the Signal, who publish stories about candidates without full fact-checks. And to all those who voted for the incumbents with the glossy mailers: FOLLOW THE MONEY. Who do you think paid for those mailers? Developers who don't live around here and don't give a shit about this city. Thanks a lot, assholes.

If you want your ex-girlfriend or ex-boyfriend to come crawling back to you on their knees (even if they're dating somebody else now) you got to watch this video
right away...

(VIDEO) Get your ex back with TEXT messages?