Jim Farley voices his concerns in the video above[1].
The continuing controversy over the Open Space Preservation District/Assessment has been largely eclipsed by the more palpable controversy over Henry Mayo. In case you have short-term memory issues, I'm referring to the recently approved plan to have homeowners pay $25/year towards preserving open space in and around the City of Santa Clarita. Proponents claimed it was a step towards controlling sprawl and saving wilderness. Opponents, in turn, called it an unnecessary burden on homeowners who would reap none of the benefits bought with their tax dollars.

Jim Farley led the opposition alongside Sterling King, and he [Jim] recently sent me a copy of a letter he's sending to the City regarding voting "irregularities." (Mr. Wilson of SCVTalk has posted this letter in its entirety here.) His concerns regard the fact that votes on the measure were supposed to be weighted based on how much of the assessment a property owner would pay. It seems that 7 developers/landowners were given votes weighted for $148,737 in assessments, but they'll pay only $9,413--just 6% of the figure used to determine their voting power. Jim Farley summarized the figures he gleaned from City voting records below.

Farley says that obtaining these data was no easy task: "The ballots were found by others in my group painstakingly thumbing through all of the ballots to find them. Then it required an additional effort to get the worksheets showing the voted vs actual assessment for the 7 developers."

So What Does It All Mean?

1. Most Claritans wanted the measure to pass, and it did.

2. Just seven major land-holders had a huge impact on the measure; they represented a quarter of the weighted votes.

3. One would expect that the voting assessment would correspond with the actual assessment, but this does not seem to be the case for "the Big 7." Collectively, they cast a vote weighted 15-times more than they'll actually pay. At some point, houses built on their land holdings will presumably make up the difference, but that could be a long way off.

4. Still, if more voters had returned their ballots, the power of the developers would have been diminished. Of course, it's easier to turn in one vote worth $31,000 than to gather 1,240 ballots from homeowners with votes worth only $25 each. 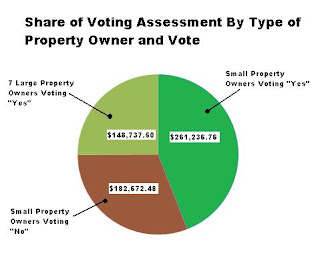 Overall, Claritans are left to ponder whether the system by which Open Space votes were counted matters. SCV got what it wanted in the end, and that will be fine for some--no need to dissect a system that gave the desired result. Others, however, will be unable to dismiss the discrepancy between votes cast and dollars paid so easily. Indeed, the call for the City to become more transparent has been fueled by actions just like this voting peculiarity.

Most immediately, though, the Financial Accountability and Audit Panel for the Open Space District is being assembled. As Farley suggests, "If the council chooses one or more of us 'outsiders' it would go a long way in assuring the citizens that their money is being spent properly. It will also rebuild trust with the community on this issue."

[1]Filmed by Sterling King--who else? Taken at the September 12th City Council meeting.
[2]Throughout, I'm referring to numbers that Jim Farley has provided me. I have no reason to doubt his figures, but if you spot a mistake please let me know.
Posted by A Santa Claritan at 10:39 PM