Why You Should Help Count SCV's Dinosaurs

Would you be interested in seeing some living, breathing, flesh-and-blood dinosaurs? Well then you’re in luck, because thousands of them call Santa Clarita home, and on Sunday, December 21st, there will be a valley-wide census. We love our dinosaurs, and this count helps us keep track of how their populations are doing year after year. If you’re feeling a bit anxious about taking a dinosaur safari on your own, worry not: there will be plenty of experts to guide you, and the dinos don’t bite—not often, at least.


I probably can’t sustain this come-watch-dinosaurs pitch much longer without making a confession. I’m talking about birds, or avian dinosaurs (things like T. rex and Triceratops are classified as non-avian dinosaurs). They’re the only dinos we have left, so we best keep an eye on them. One of our best means of doing so is the National Audubon Society's Christmas Bird Count (CBC). This year marks the 115th annual CBC, a massive effort that will span the Americas and enlist the help of well over 50,000 birders, ranging from amateur bird-watchers to professional ornithologists. Santa Clarita’s count is an invaluable part of the effort.
If counting birds is so awesome (it is), why tease with dinosaurs? Well, Santa Claritans have a miserable record of showing up for their own CBC, instead relying mostly on the efforts of birders who drive up from the Valley or LA. We've got great birds like bald eagles, greater roadrunners, phainopeplas, orange-crowned warblers, and red-naped sapsuckers, to name just a few. But this means little to most Claritans. So I'm unashamedly going the dinosaur route. The SCV CBC may be your best chance to give the whole family the priceless holiday magic that is encountering real life dinos. 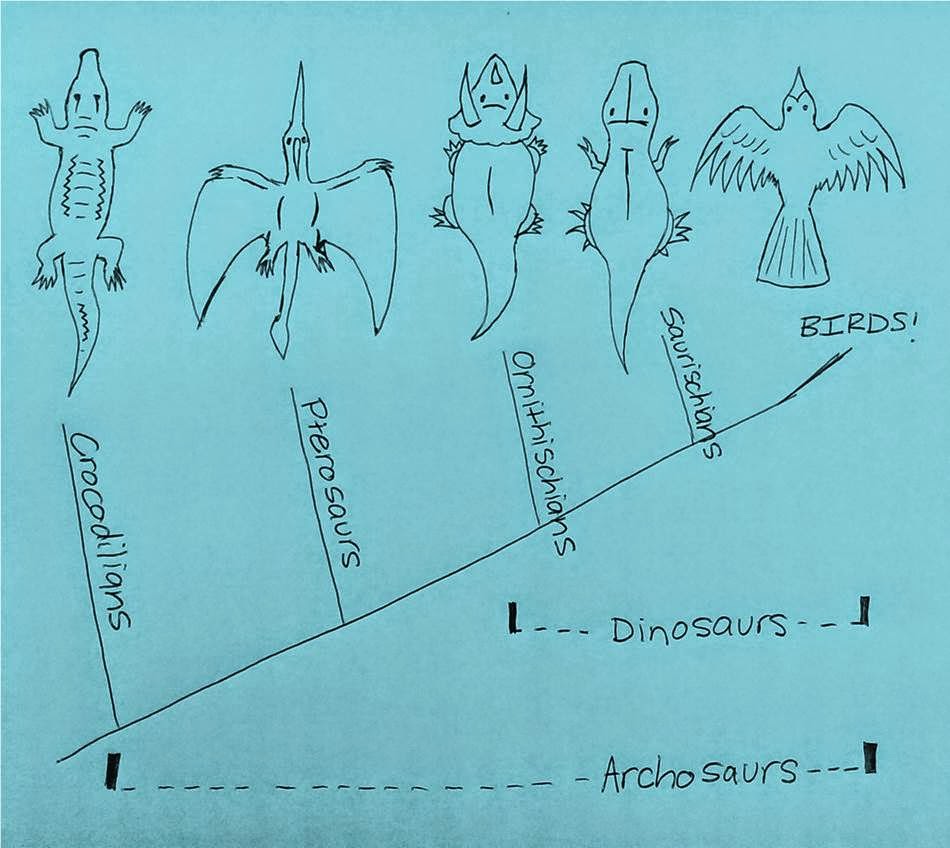 Here's a simple but scientifically sound phylogeny/tree-of-life for Archosauria to prove my point. It shows that while not all dinosaurs are birds, all birds are dinosaurs.
Whether you call them birds or dinosaurs, there's no arguing that these counts are key to conservation. The nationwide dataset amassed since 1900 is enormous, and it allows for comprehensive analyses of the status of America's birds across space and time. But the counts are even useful at the local level. For example, we can say California quail are undergoing a statistically significant decline in Santa Clarita based on a 10-year time-series, shown below. Who doesn't love these anxious, talkative, crisply-attired little butterballs? And we know their decline is a mathematical trend, not merely an anecdote, so maybe it's time we start paying closer attention. 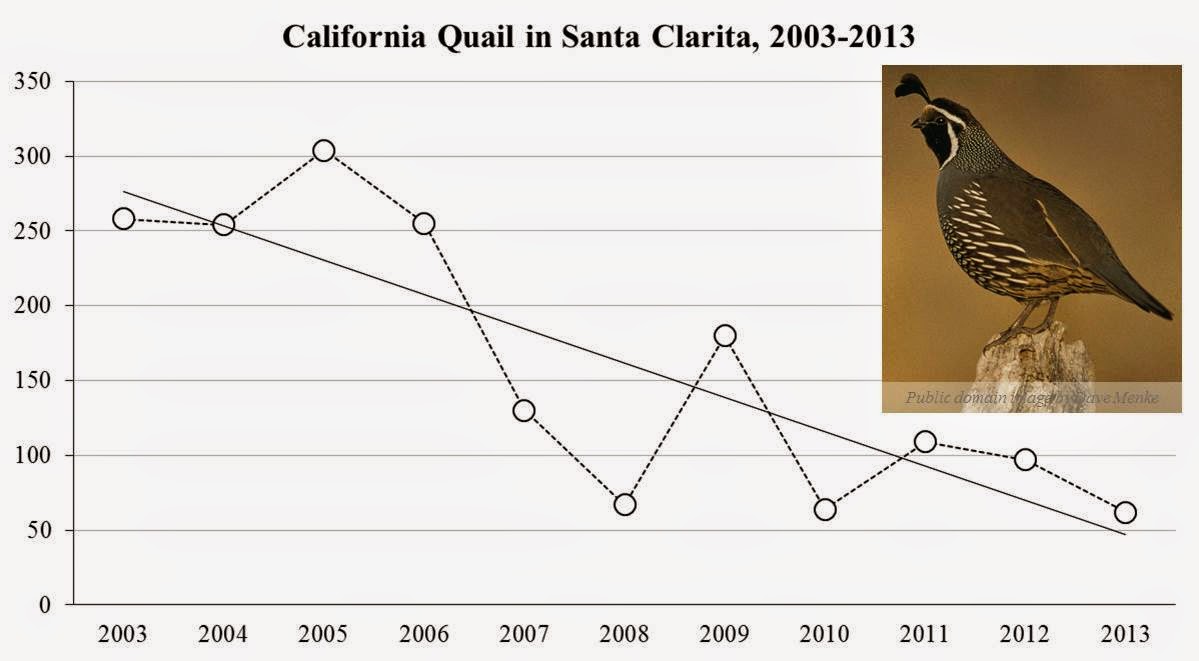 The total number of quail counted at each Santa Clarita Christmas Bird Count has declined from hundreds in early 2000s to dozens in recent years. Effort among years has remained nearly constant at about 50 hours of observation spread across the SCV.
If you don't know a goldfinch from a golden-crowned kinglet, you can still show up for the CBC and be a big help. Locals who can navigate Santa Clarita or keep tally of the birds people shout out are much beloved but in short supply. So mark your calendars for next Sunday. It's the day to count all the amazing dinosaurs flying around your home town.
Pertinent details:
*Meet at 7:00 am sharp on December 21, 2014 at Western Bagel (Kmart shopping center at Bouquet/Soledad).
*Ready yourself as you would for a day of leisurely hiking: dress in layers, don hat, select boots or shoes that can get some nature on them. Complete ensemble with water, sunblock, snacks. Binoculars ideal, but unaided eyes and ears work, too. If you can neither see nor hear, your enjoyment of this activity will be limited to the refreshment of strolling through nature on a brisk winter morning.
*Find a destination of your liking (Placerita? Bouquet Canyon? Castaic?), join the group, and carpool or caravan to site, taking notes on the identify and count of all birds observed.

*Regroup at lunch (typically at Tacos y Burritos el Pato, perhaps since it's named for a bird) to share findings.

*Take the rest of the day to do last-minute Christmas shopping or attend a holiday party, remarking to all who you encounter about the surprising abundance and diversity of dinosaurs in Santa Clarita.
Posted by A Santa Claritan at 4:12 PM

Every Saturday morning, fairly early - between 7a or 8 a I see a covery of about 20 plu quail at Pink Pony curve on Placerita Canyon just east of Masters College