Old Woes in the New Year

It's been a while since the last Santa Clarita City Council meeting, but things picked up right where they left off.[1] Indeed, all of 2014's issues are now issues in 2015. Mobile home park rents? Still a thing. Advertising and signs in public spaces? Still a thing. Chiquita Canyon Landfill? Now an even bigger thing. The present looks very much like the past--some people are just sitting in different chairs now.

To kick off the evening, Councilmember Laurene Weste delivered one of her most puzzling invocations yet. She alluded to the approach of Martin Luther King, Jr. Day, but then waxed abstract, talking about America's various other "great men." She described how Teddy Roosevelt saved a lot of wilderness acreage. She mentioned Lincoln's Emancipation Proclamation. She even detailed Franklin Roosevelt's hopes for the social security system. And then she got to King ("who was also a great man") and civil rights and such. And there, the curious journey ended.

There was but one award to be received this evening, and it came from the august stewards of the Southern California Chapter of the American Public Works Association. They declared the Newhall Roundabout to be the project of the year. Mayor Marsha McLean went so far as to say that it has helped rejuvenate Old Town Newhall. So the next time you drive around that small, circular bit of road, know that it's an award-winning small, circular bit of road.

During the first bout of public participation, several speakers addressed mobile home park rents. The City's draft ordinance calls for annual rent increases of at least 3% and no more than 6%. The 3% floor has many residents upset because they live on fixed incomes that don't necessarily grow as quickly as their rents will. Doug Fraser spoke, per usual, but the most fiery remarks came from a woman speaking on behalf of her mother and seniors: "I think you all should be appalled at your behavior." She went on to say that the city councilmembers should step down if they won't stand up for residents, and she attacked City Manager Ken Striplin for collecting a substantial income while not doing more for mobile home park residents.

The owner of Fiesta Auto Insurance came up to express his dismay that the City won't allow his mascot--a person in a crow suit--to stand on the curb and advertise insurance. You may have seen the Fiesta bird: 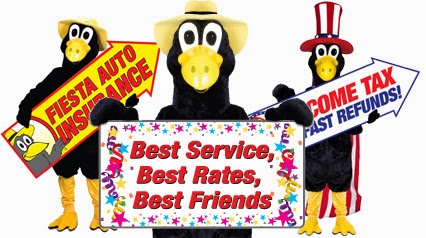 Dennis Conn, a man we might describe as a "colorful local personality/aspiring politician", rose to ramble. He spent a while describing how his arms were hurt in a bicycling accident, his visions for the future, and his strategy for effecting change, using just one word at a time.

Steve Lee and Cam Noltemeyer spoke about Chiquita Canyon Landfill, which will become the biggest landfill operation in the United States if the planned expansion is approved. Both implored the council to take a more active role opposing it. Noltemeyer said that Elsmere Canyon was outside of Santa Clarita's boundaries when McLean and others fought plans for a landfill there, so Chiquita should be no different.

The topic of the nation's largest landfill operating next door would seem to be the most important thing to address, but what really got to Mayor Pro Tem Bob Kellar was the story of Fiesta Auto Insurance being unable to advertise via bird costume. He asked that compromises be considered and help be offered. As for mobile home rents, City Manager Striplin said that the ordinance final draft will be presented to the council on February 24th. He said that there have been a number meetings to discuss the ordinance drafts, and that since mobile homes weren't on the agenda, the council couldn't really discuss rents at this evening's meeting. Mayor McLean seized on what Striplin said and suggested that people just needed to be informed about the process. To the contrary, it seems the residents are very much involved in the process and simply trying to stop some provisions (like the 3% annual rent increase) before they come to the council as a final draft.

The Chiquita Canyon Landfill expansion was spoken of in mildly sympathetic terms. Striplin and McLean noted that a letter had been sent in response to the draft EIR for the project. The mayor explained, "I don't like landfills. I think landfills need to go away." She wished there were other viable options, but since there aren't, she concluded it's just an unfortunate situation without a clear solution. Councilmember TimBen Boydston asked if there could be another meeting to bring up concerns. City Attorney Joe Montes said these concerns could be communicated, but Chiquita would not be obligated to respond to them in writing.

After covering public participation, the city councilmembers shared news and updates. Several touched on Charlie Hebdo, and there were quite a few remembrances of recently deceased Claritans. The death of 98-year-old Melba Walker was particularly poignant. She was one of the children who lived in the cabins of Placerita Canyon and was truly a pioneer, as Councilmember Weste put it.

Nothing on the consent calendar prompted much in the way of support or protest. Cam Noltemeyer spoke on Item 5, which awarded a contract to prepare an EIR for a large mixed-use development in Canyon Country. A project at the site had been proposed before, and she felt they were recycling much of the old work, but Striplin informed her that the project was undergoing a complete, new evaluation.

Item 6 recommended that Accela, Inc., be awarded a contract  to update permitting systems. Boydston was concerned there was no bidding process, but a member of staff assured him that other cities have been "very happy" with Accela.

Alan Ferdman questioned Item 7, in which staff recommended awarding a contract for a reserve study of the city's landscape maintenance district operations. About 1,200 acres are involved, and the study would be used for long-term financial planning. He thought it seemed somewhat redundant with other efforts, and Boydston pursued this notion in conversations with staff, but he was willing to vote for it in the end.

Finally, Jim Farley submitted a written comment expressing his approval of a switch to outdoor LED lighting along paseos in Northbridge.

In sum, the consent calendar passed with the recommended actions on all items.

After a relatively routine annexation into a landscape maintenance district (protested by a routinely outraged Cam Noltemeyer, who was upset that developers vote to join the districts only to pass costs on to eventual residents), there was a very unnecessarily drawn-out discussion of the Soledad Canyon Road Corridor Plan. I can summarize the plan more succinctly than staff: the style will be the same, only possibly a bit better and more uniform. There was grand talk about "creat[ing] a clear identity" for Canyon Country and "rustic Californian" architectural style, but changes for new development aren't exactly sweeping.

Councilmember Boydston ruined an already over-wrought discussion by making some points about traffic on Soledad. He argued that the plan was based on certain traffic assumptions, and he spoke more generally about the sorry state of traffic congestion in Santa Clarita, predicting the eventual SFV-ification of SCV if something wasn't done about it. Mayor Pro Tem Kellar countered Boydston with a useless anecdote about how quickly he can get from point A to point B on Soledad, contending that it's better than it used to be. In the end, everyone voted for the corridor plan except Boydston, who felt it missed addressing some real issues.

Stacy Fortner brought up Chiquita Canyon Landfill again. She pointed out that Kellar showed more concern for the auto insurance mascot than the people of Val Verde. "They're not being heard," she argued. A couple from Val Verde also spoke, using a map, news stories, and statistics to build a case that the planned landfill expansion would harm residents and diminish quality of life valley-wide. Patti Sulpizio asked the council "to advocate for us" on the landfill, since it's within the city's sphere-of-influence. Overall, people just wanted the council to give the landfill expansion some consideration and discussion, which has been fairly minimal to date.

There was a bit of a discussion over a point Sulpizio brought up in regard to SCVTV. She recalled that it had run political ads for Measure S during council meeting broadcasts, and she asked if this was proper for a channel so heavily subsidized by the City of Santa Clarita. Boydston took up and pressed her points with City Attorney Joe Montes. Montes didn't see any overt wrong-doing, but he was reluctant to render a firm legal opinion without knowing more details. The meeting ended a bit after 8:30.

Posted by A Santa Claritan at 1:11 AM