Only in SCV: Free Stuff For Being Young

Kids have it pretty hard these days, especially in Santa Clarita. They have to be well-versed in High School Musical[1], get the grades it takes to get into C.O.C., and survive ingestion of lead-based paints on their Dora the Explorer toys[2].

Spending a day in the shoes of a Claritan kid would surely make those whiny orphans from Sub-Saharan African realize how lucky they are. All they have to worry about is growing enough millet to eat next year and getting their HIV meds![3].

Anyhow, I’m happy to know that I’m not alone when it comes to thinking it’s high time that this community showed its appreciation of youth. According to an August 30th City press release “Every year, Americans celebrate Mother’s Day, Father’s Day…even Groundhog’s Day. The City of Santa Clarita thinks it time to honor children by celebrating a ‘Day for Kids.’[4]" To be precise, Santa Clarita will be officially participating in the nationwide Boys & Girls Club's Day for Kids held on the third Saturday of September[5]. 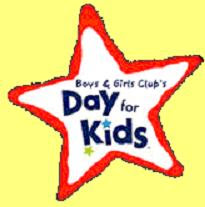 Click on the trademarked star to learn more about the DFK. According to the Boys and Girls Club-sponsored site, "By celebrating BGC Day for Kids, we remind the children in our lives just how important they are." Obviously, the bulk of participants will be the negligent parents who were just waiting for a national organization to tell them to start caring about their kids.

While the event is purportedly about getting parents to be more involved in the lives of their children, it’s also a great chance to win free stuff. Several community businesses have come forward with donations to show that they’re pro-kid. Wal-Mart, for one, has given a computer that will be raffled off to a child in Newhall Memorial Park, the epicenter for the event. Blockbuster has even donated an X-Box.

Because the Day for Kids is but two years old, I’m not sure if it’s traditional to buy one’s children additional gifts in honor of the occasion. I imagine it should be.

[1]Whether it’s because they like it or because they want to be able to mock it depends on age. And yes, I was blessed to attend Valencia High School with HSM co-star Ashley Tisdale. She’s changed a lot in five years. For starters, her skin and hair are no longer gray.

(Then & Now)
[2]Let's explore high concentrations of lead in kids' toys!
[3]Talk of hungry African kids vs. American kids always recalls this classic the Onion article
[4] Press release here. Does seeing the phrase written as “Mother’s Day” bother you too? If so, reading some guy's thoughts on apostrophe placement in the phrase might help
[5]Learn more about this heart-warming idea here
Posted by A Santa Claritan at 11:45 PM

Labels: Day for Kids, Only in SCV

In deciding whether to use an apostrophe in such constructions, we cannot always depend on logic to lead us to the correct choice. For example, referring to the second Sunday in May as "Mothers’ Day" would seem logical since we intend to honor all mothers and not simply one mother. But if we look up the phrase in Merriam-Webster’s Collegiate Dictionary (11th ed.), we find that the noun "mother" is rendered as a singular possessive: "Mother’s Day." Similarly, Webster’s gives us "Father’s Day," not "Fathers’ Day."

According to Wikipedia (so take it for what it's worth), there is indeed a "Mothers' Day" in the United Kingdom and Ireland. I think America needs to follow suit with its apostrophe use.

OMFG! neva have i ceen any1 more beatiful then ashley!!! like even when she was younger and stuff she was so pretty and like now i know her hair ain't no weave becuz it was totes as beutiful when she was in high skewl. pleez tell every1 wut a good singer and actress she is becuz my mom and dad tell me she totes ain't but i'm like uh, no, she's the best and way better then like there dumb beetles and rolling rox. whatevs, thankx for posting!

If you need your ex-girlfriend or ex-boyfriend to come crawling back to you on their knees (no matter why you broke up) you got to watch this video
right away...

(VIDEO) Have your ex CRAWLING back to you...?