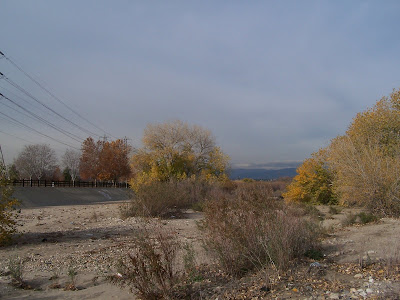 In Southern California, winter is more of a suggestion than an event. Yes, it has been windy and yes, it has dropped below freezing, but the plants and beasts around us manage to do just fine. In this post, I discuss some native trees that are just now showing their best seasonal color. Apparently, they're completely unaware that it's basically January and that all decent trees should be naked by now. Likewise, birds continue about their business despite the chill. To some birds, SCV is the "south" referred to in "flying south for the winter", and below you'll find a few pictures of and an opportunity to get to know your flighty neighbors. 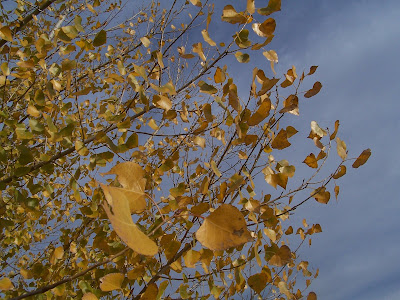 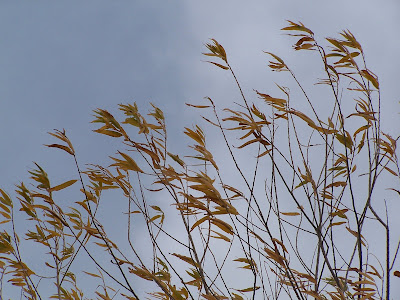 Leaves of the Fremont’s Cottonwood (top) tremble in the slightest breeze. Their shimmering creates a pleasant, dry rustle. The leaves of Arroyo Willow (bottom) form perfect, golden tapers that align parallel to the wind. 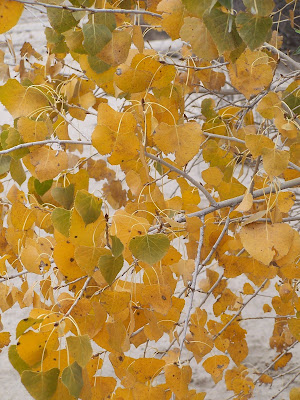 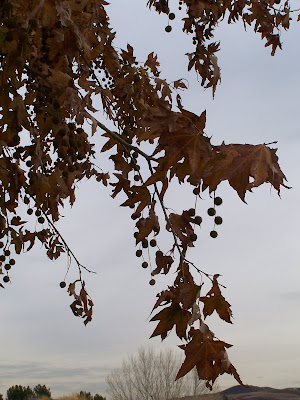 Gold definitely dominates the foliage scene. While it is brightest in the cottonwoods (left), the hue works with red to give warmth to the foliage of Narrowleaf Willows, and gold veins help the russet leaves of sycamores glow(right). 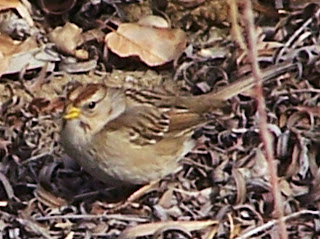 White-crowned sparrows (above) winter in the SCV. On a walk through the Santa Clara River, they seemed to be everywhere. I watched one flock scratch through fallen willow leaves for insects and seed. Though sparrows may appear completely engrossed in their search for food, they always keep an eye out for trouble. This vigilance pays off. Shortly after I’d found them, several members of the flock gave high, thin whistles of alarm and the birds hurled themselves into a nearby tangle of willow. Seconds later, the culprit—a small falcon called an American Kestrel—passed just overhead, slicing the wind with its scimitar wings. 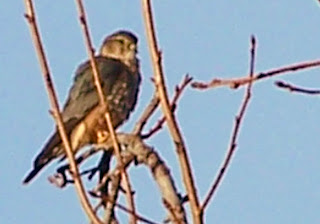 A male Merlin, another small falcon and dispatcher of sparrows, also had his eye on the flock from his perch in a nearby backyard. According to Brian Wheeler[1], the Merlin “kills prey by breaking the neck with its notched bill. All prey are decapitated […] legs and leg bones may be swallowed whole.” With neighbors like these, SCV’s sparrows are never left wanting for terrifying ways to die.

Where To Go For a Nature Fix Right Now:

*Christmas Bird Count (tomorrow, Saturday the 29th, 7am) through Castaic, Bouquet Canyon, Placerita, etc…
The Christmas Bird Count in SCV is one of thousands nationwide. Typically, Claritans get up very early and find tens of thousands of birds of around 130 species. The birds are identified and counted so that ornithologists can spot trends like range expansions or population declines. And not all the birds are crows and pigeons—Golden Eagles, Costa’s Hummingbirds, Horned Larks, and other cool creatures should also be seen. I’ve been on a “CBC” before, and they’re actually kind of fun in a completely bizarre sort of way. Even if you know little to nothing about birds, you can help keep a tally of the thousands of fowl that get identified and counted. I say that everybody should go on a Christmas Bird Count once—you’ll enjoy nature, have a wonderfully strange story to tell, and the bird people are generally quite agreeable.

To attend, meet at Western Bagel (in the K-Mart Shopping Center on the corner of San Fernando/Soledad) at 7am sharp on Saturday, December 29th. Bird counting will continue until 1pm, but you're free to leave whenever. Bring heavy jacket, water, snacks, binoculars. Leave sanity at home.

*South Fork Trail
This is an ideal place for a brisk walk and exactly where I went to glimpse the winter color in this post. Simply travel east on Magic Mountain Parkway past the Barnes & Noble Shopping center and turn right into the gravel lot that comes just before you cross a bridge over the river. If you can hear the crackle of power lines overhead, you’re in the right spot. Walk south on the path for the best color. The trail can also be biked, but if you or your spawn use scooters, those hand-cranked bikes, or other obnoxious forms of transportation, I will openly mock you should I also be present on the path. Light is the best in the hours just before sunset; the golds and yellows all around you really start to pop.

[1]This is the Brian Wheeler who authored Raptors of Western North America, Princeton University Press, 2003

Posted by A Santa Claritan at 3:48 PM

Dear I Heart,
While I myself heart SCV (though possibly less than yourself), I am becoming increasingly disappointed in you. Where have you been? Are you so enamored of seeing your name in glossy print (Inside SCV) that you are abandoning your faithful online readership? Please don't forget your humble beginnings!

I'm sorry but I only just now found your comment. By the time you posted that--January 15th--I had added 4 posts for the month of January, 2 per week as it usually is. All I can say is expect more as we move into elections and the re-emergence of issues like CEMEX and HMNMH.